Well done. Look what authentic hosts in San Gimignano are offering to you on 9flats. 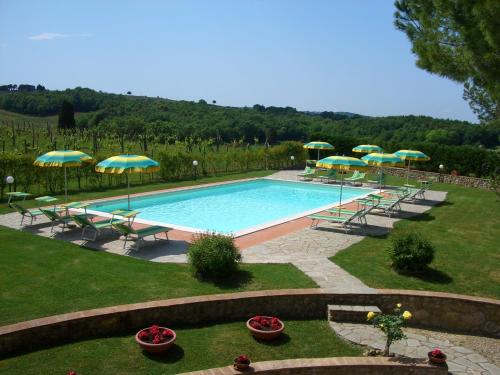 This restored Tuscan farm house is surrounded by pine trees in the green hills of San Gimignano. It offers an outdoor pool and rustic apartments with satellite TV and a patio.Book now
from $89 per night 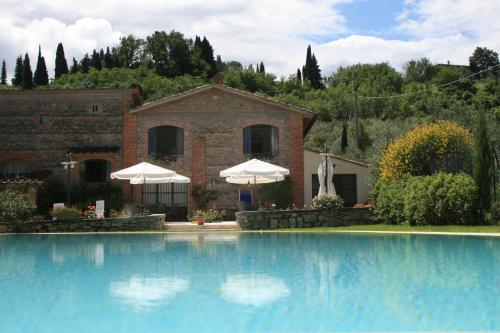 With pool views, B&B Ponte a Nappo San Gimignano is located in San Gimignano and has a restaurant, luggage storage space, bar, garden, seasonal outdoor pool and barbecue. The bed and breakfast features both WiFi and private parking free of charge.Book now
from $114 per night 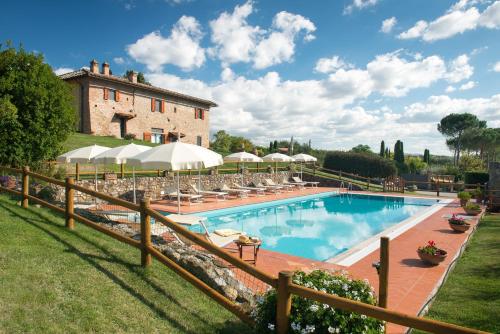 Set in the Tuscan countryside, Il Coltro is a historic farmhouse 10 minutes' drive from San Gimignano. It offers an outdoor swimming pool and apartments with wood-beamed ceilings and terracotta floors.Book now
from $12 per night 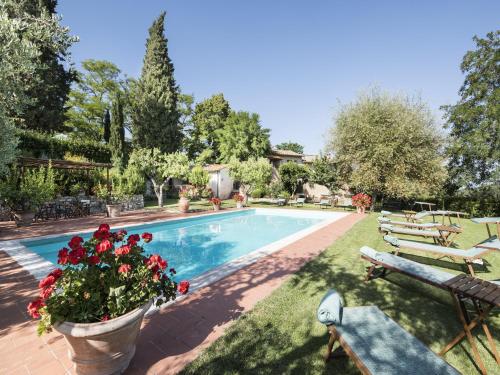 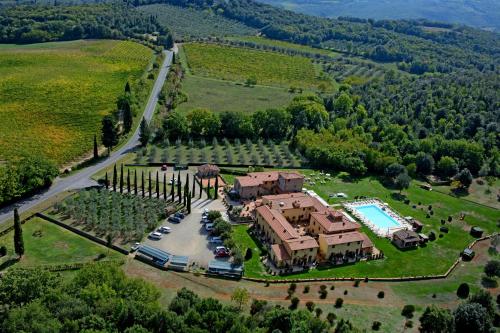 Just 5 km from San Gimignano, Le Terre Rosse is close to the Via Francigena, the ancient pilgrim route to Rome. This charming hotel and restaurant is surrounded by a large green park with outdoor pool.Book now
from $12 per night 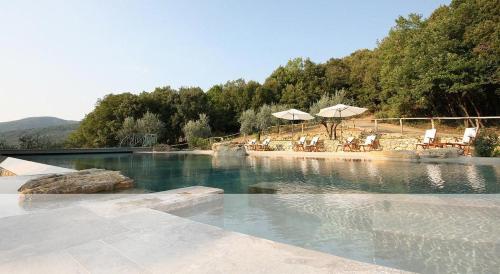 Overlooking the Tuscan hills, Borgo Mommialla features a garden with sun terrace and an outdoor swimming pool with waterfall and hydromassage. The property is located in a peaceful area 10 km outside San Gimignano.Book now
from $122 per night 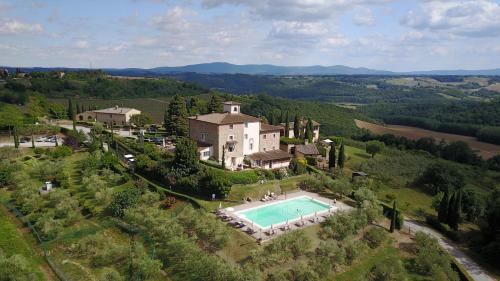 In a beautiful area in Tuscany, this old-yet-renovated 10th-century castle offers apartments in a quiet countryside setting. It has an outdoor pool and views of San Gimignano, 8 km away.Book now
from $137 per night 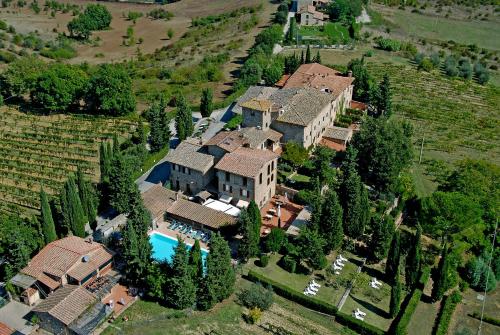 Hotel Pescille is set in an old farmhouse in the Tuscan countryside, 5 minutes' drive from San Gimignano. It offers a large garden with swimming pool, and free parking.Book now
from $12 per night 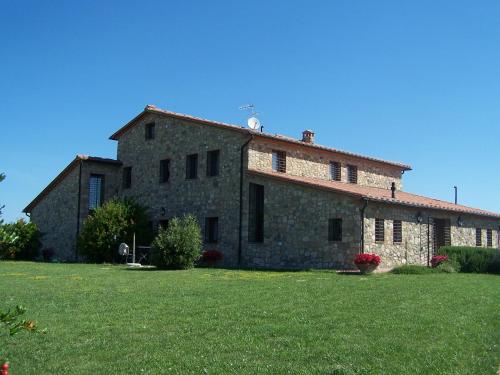 Featuring an outdoor pool, La Colombaina in Volterra provides accommodation with free WiFi and free private parking for guests who drive.Book now
from $12 per night 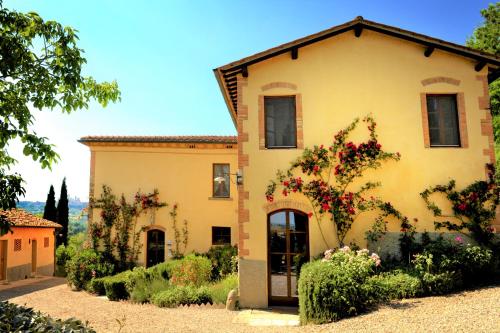 This enchanting 15th century property, nestled in the rolling hills of Tuscany, offers an exceptional view of the surrounding countryside and San Gimignano. A free outdoor pool is available on site.Book now
from $12 per night

Hotel Da Graziano has a quiet location, 400 metres from San Gimignano centre. It features air conditioned rooms and a contemporary Tuscan restaurant with a sunny dining terrace. Free WiFi is available in all public areas, and parking is free.Book now
from $108 per night 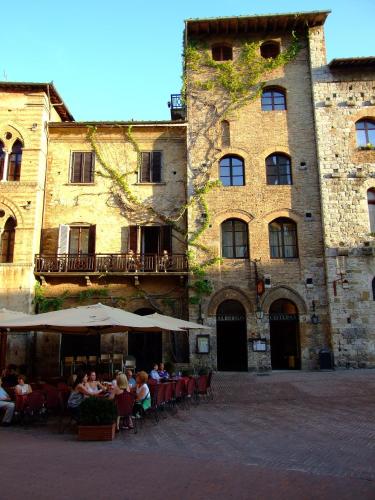 Housed in an elegant, 14th-century building La Cisterna is set in a picturesque, namesake square in the heart of San Gimignano. The rooms offer air conditioning, free Wifi and a flat-screen satellite TV.Book now
from $74 per night

See all 351 accommodations in San Gimignano

With an enviable position atop a hill in the Tuscan countryside, the medieval walled city of San Gimignano is a scenic delight and has one of the highest proportions of surviving towers of anywhere in Italy. Surrounded by walls on three sides, the historic buildings which line the streets, a mix of Gothic and Romanesque architecture, make San Gimignano a pure pleasure to walk around. Despite a large number of day visitors from nearby Florence swelling the number of people present in the town, the actual population of San Gimignano is fairly small. By renting a holiday apartment in San Gimignano from 9flats, you will feel more like a local than a holidaymaker as the apartments are mainly located in residential areas. This is similar in a way to couchsurfing in San Gimignano but the 9flats experience is much more comfortable with a far greater degree of personal space.

Despite being classed as a city, San Gimignano is compact in size and is very easy to get around. This makes it a highly popular destination for day trips from the cities of Florence and Siena which are in close proximity. With no traffic allowed inside the city walls, San Gimignano enjoys a fairly peaceful atmosphere, albeit one which is often interspersed with the chatter of thousands of day-trippers. The city is most famous for its preservation of many towers, fourteen in total, which have managed to survive wars and catastrophes and remain standing proudly today. The presence of these towers, in addition to a number of beautifully preserved churches, led to the centre of San Gimignano being granted World Heritage status in 1990. 9flats has many lovely apartments in San Gimignano itself and a number in nearby towns such as holiday apartments in Colle di Val d’Elsa. As already mentioned, many people visit San Gimignano on day trips to Florence, so by renting a holiday apartment in Florence you can still enjoy the delights of this picturesque walled city.

San Gimignano takes on a completely different persona by night. When the sun goes down and the scores of day-trippers have departed, the old town becomes beautifully quiet and the historic buildings take on an almost serene quality. It can often feel like the entire city is yours and yours alone. Visiting here just for the day robs you of this unique atmosphere, so by renting a holiday apartment in San Gimignano from 9flats, you are giving yourself the opportunity of experiencing something that scores of day-trippers miss out on.

9flats – The Affordable Alternative to Hotels