Well done. Look what authentic hosts in Honolulu are offering to you on 9flats.

Located 9 minutes' walk from Waikiki Beach and International Market Place, Holiday Inn Express Waikiki is 2 km from the Honolulu Zoo and offers free buffet breakfast daily. It features a large sun deck, an outdoor pool, a hot tub, and free WiFi throughout the property.Book now
from $102 per night 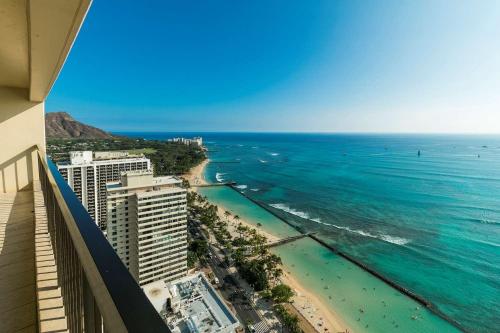 Aston Waikiki Beach Tower is an all-suite property located across the street from Waikiki Beach. Each suite offers fully equipped accommodation with kitchens. On-site amenities include an outdoor pool with a separate children's pool and a modern recreation deck. Daily maid service is available.Book now
from $549 per night

Located between the Hawaii Convention Center and Ala Moana Shopping Center, Ala Moana Hotel features 2 restaurants on site. Free WiFi is included in all guest rooms.Book now
from $134 per night Embassy Suites By Hilton Oahu Kapolei - FREE Breakfast has a restaurant, outdoor swimming pool, a fitness centre and bar in Kapolei. Featuring a shared lounge, the 4-star hotel has air-conditioned rooms with free WiFi, each with a private bathroom. The accommodation features a 24-hour front desk, room service and luggage storage for guests.Book now
from $194 per night 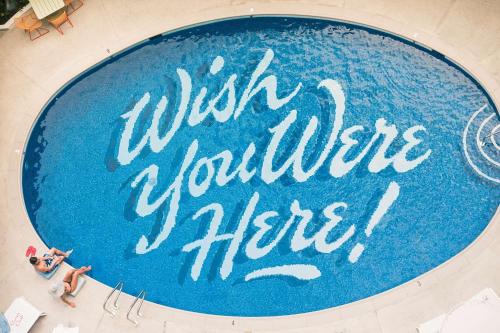 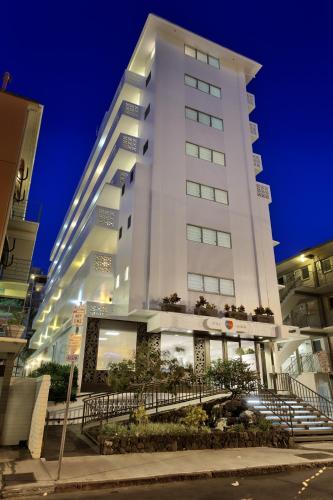 Less than 5 minutes’ walk to Waikiki Beach, this boutique hotel is located in the heart of Honolulu’s Waikiki district. Free Wi-Fi is included in each guest room. Honolulu Zoo is just steps away.Book now
from $94 per night 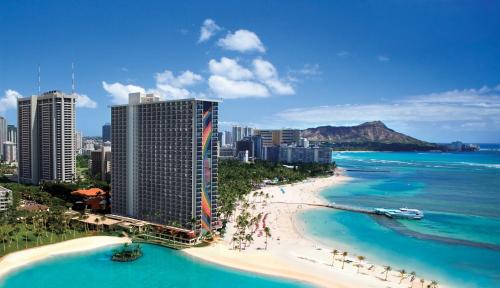 Located on the shores of Waikiki Beach, Hilton Hawaiian Village Waikiki Beach Resort sits on 22-acres and features over 20 restaurants and lounges, 90 shops and boutiques, and a 5,000-square foot family activity pool.Book now
from $180 per night Perfectly positioned at the gateway to Waikiki and fronted by Luxury Row shopping, The Ritz-Carlton Residences, Waikiki Beach offers stylishly-appointed studios along with residential accommodations and penthouses, all of which provide unparalleled views of the Pacific Ocean.Book now
from $451 per night Featuring free WiFi and a complimentary daily breakfast, Hampton Inn & Suites Oahu/Kapolei, HI offers modern accommodations in Kapolei on the west side of Oahu.Book now
from $163 per night

Located across the street from Waikiki beach, Waikiki Beach Marriott Resort & Spa boasts 5 restaurants and the Royal Kaila Spa on site. This resort is 100% smoke-free.Book now
from $219 per night 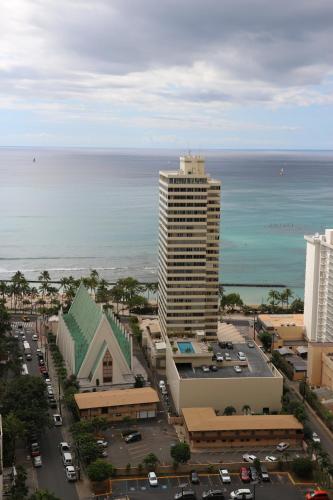 Located in Honolulu, within 400 metres of Queen's Surf Beach and 700 metres of Saint Augustine by-the-Sea, Waikiki Banyan T1-3204 offers accommodation with free WiFi, air conditioning, an outdoor swimming pool and a tennis court. Boasting free private parking, the apartment is in an area where guests can engage in activities such as hiking, snorkelling and cycling.Book now
from $12 per night

See all 1045 accommodations in Honolulu

HOTELS, APARTMENTS, VACATION RENTALS AND BED AND BREAKFAST IN HONOLULU

Hawaii’s capital, is located on the southeast coast of the island of Oahu and has a population of about 400,000 inhabitants. Its name means “sheltered bay”. It’s also known as “the big pineapple”
It presents itself as a safe city immersed in a pleasant mixture of ancient and modern, American and Polynesian, a tropical paradise made in the US without forgetting its historical and cultural roots.
Sun, dream beaches and exotic holiday flair – this is how most visitors imagine their holiday in Hawaii. In fact, with a holiday home in Honolulu, you have the world-famous Waikiki Beach right on your doorstep and you can enjoy it here as well as the rich and beautiful under palm trees. From surfing lessons to cycling excursions under palm trees to visiting the countless beach bars, lounges and nightclubs, there’s hardly anything in Honolulu you can’t do here in tropical temperatures. Book your private apartment in Honolulu now at 9flats and relax with a stroll along the entertainment mile Kalakaua Avenue, which offers great restaurants, cafes and exclusive shopping. Enjoy Honolulu’s legendary beach with a holiday home in Waikiki just a few minutes walk from Waikiki Beach. At 9flats, a private accommodation also gives you an insight into the Hawaiian way of life, but you don’t live together with other travellers.

Finding your own Honolulu

Honolulu is known for its relaxed atmosphere by tourists from all over the world, and in fact the city was a sleepy little village until the beginning of the 19th century, when it became the largest city on the island through its natural harbour. The former Hawaiian royal seat is today as the 50th state of the USA not only one of the most popular destinations worldwide, with an apartment in Honolulu you can also discover such unique sights as Pearl Harbor in the west of the city. Even if you’re planning on staying only one night in Honolulu, don’t miss a visit to the memorial and visit the USS Arizona Memorial, built over the sunken battleship USS Arizona. In downtown Honolulu, you can also visit the ‘Iolani Palace, the former Hawaiian royal residence dating back to 1882. From an accommodation in Manoa you can also hike through some of the most impressive landscapes Hawaii has to offer in the Honolulu Watershed Forest Reserve, close to the city. On your way to Manoa Falls, with a bit of luck you may even pass original locations from the films Lost and Jurassic Park. For night owls, a private holiday home in Honolulu also offers the best conditions; especially along Kuhio Avenue in Waikiki, you’ll find a wealth of nightclubs, sports bars and pubs offering a variety of snacks. Or you can book a cheap hotel as well. In 9flats we have all kinds of accommodations and best hotels in this amazing city.

Although the city is relatively small, it is divided into 9 districts, each with its own characteristic neighborhood, with its own style and attractions. In Honolulu there is a lot to do and see besides going to the beach!

Surely one of the most famous destinations of all Hawaii islands is Waikiki The centrepiece of this neighborhood is Kalakaua Avenue, comparable to The Strip of Las Vegas, with lights and signs, chic and luxury shops and gourmet restaurants. And of course the famous beach which, although very beautiful, is not natural but was built by man. This neighborhood greatly enhances its charm in the evening, when the lights come on and the locals and tourists start to crowd in. It’s a neighborhood that shows its purely “western” soul. Taking a walk on Kalakaua Avenue first and then resting on the beach is a perfect combination. From the beach of Waikiki stands the silhouette of the volcano Diamond Head.

With a not very demanding walk you can reach the top and observe the magnificent panorama.
Also worth a visit is the Waikiki Aquarium (2777 Kalakaua Ave.), the Waikiki Shell, a beautiful theatre in Kapiolani Park (3840 Paki Ave.), a park perfect for relaxation and walks. In the southern part of the park, you find Kapiolani Beach Park.
Don’t miss a visit to the central district Downtown Honolulu where, in addition to government buildings, there are many museums and also historical and interesting buildings. We recommend the Hawaii State Art Museum, the Aloha Tower where you can enjoy a 360 degree view of the city. Another stop is Ala Moana, a residential and commercial district. Here, in fact, is the Ala Moana Center, one of the largest shopping centers in the U.S.!
Moving a little further south, the main attraction of this neighborhood is the Ala Moana Regional Park, with its 1 km long Ala Moana Beach Park. The beach is a must for all surfers. In the park, you can go on beautiful mountain bike rides or run along the sneakers that offer a beautiful view of Honolulu Downtown. In this neighborhood you can visit the Honolulu Zoo and the Honolulu Museum of Art.
Also take a nice walk along Kuhio Avenue, the street of restaurants and ethnic street food. Here you will surely find good quality food at very affordable prices.
Of course, you can’t miss to visit Chinatown, where among temples of different religions and crafts such as IzumoTaisha Shrine and Kuan Yin Temple, you will find the atmosphere, food, people and customs of real China.
It only takes a few minutes by car from downtown Honolulu to the magnificent Hanauma Bay.

What to eat in Honolulu?

Where to eat in Honolulu?

For many visitors, a holiday home in Honolulu on O’ahu is just a stopover on the way to other Hawaiian destinations such as the surfing paradise of Maui or the eastern island of Big Island. If you want to explore the other islands from Honolulu, local airlines such as Hawaiian Airlines or Island Air Hawaii will take you to your Hawaii Accommodation, in about half an hour, while on O’ahu you can use the award-winning public bus network with twelve lines. If you’re spending your vacation in an apartment in Lahaina on Maui, you should use your visit to the old whaler town to visit the Pioneer Inn, a centennial whaler pub with sea views.

What to Do in Honolulu, Hawaii | 36 Hours Travel Videos | The New York Times