Well done. Look what authentic hosts in Gdansk are offering to you on 9flats. 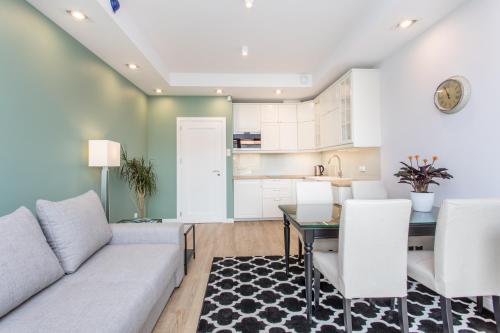 Golden Tulip Gdańsk Residence is located in a quiet area of Gdańsk, near the sandy beach on the Baltic Sea, and features spacious rooms and apartments with free WiFi access, as well as a free indoor pool, a sauna and a steam bath. The property consists of 10 separate buildings.Book now
from $61 per night 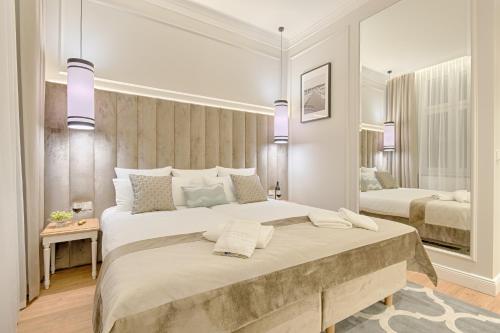 Set in Sopot in the Pomerania region, with Sopot Pier and Crooked House nearby, Apartamenty Molo Residence offers accommodation with free WiFi.Book now
from $74 per night 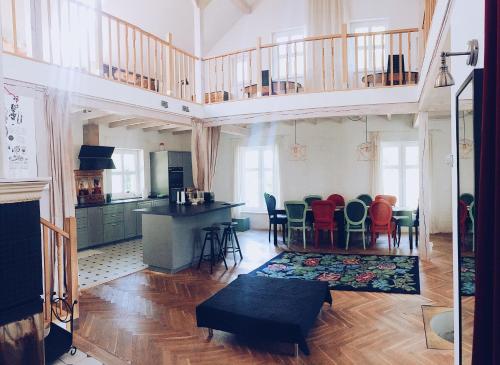 Offering a barbecue and views of the garden, Dom z sauną niedaleko morza is a historical property set in Cedry Małe, 11 km from the Baltic Sea. Sauna and hot tub are featured. Gdańsk is 16 km from the property. Free private parking is available on site.Book now
from $160 per night 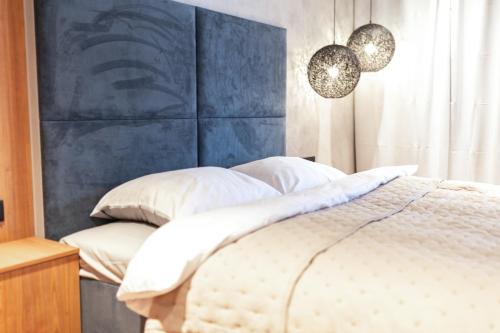 Set in Gdańsk in the Pomerania region and Museum of the Second World War reachable within 600 metres, Baltic Apartments Main Town Towers offers accommodation with free WiFi, a children's playground, a garden and free private parking.Book now
from $68 per night 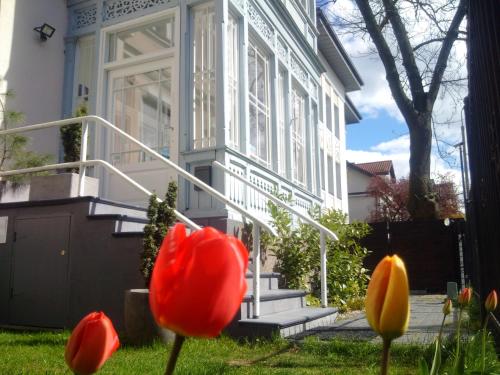 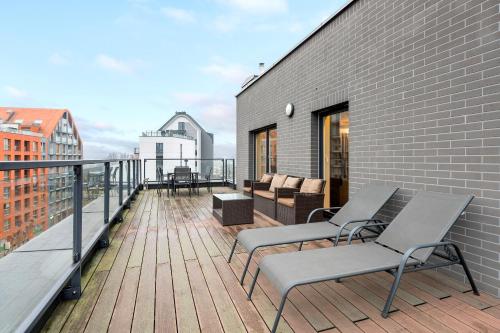 Featuring a terrace and free WiFi, Stay Win Prime Apartments Chmielna is located in the centre of Gdańsk, close to Green Gate, Long Bridge and National Maritime Museum.Book now
from $732 per night 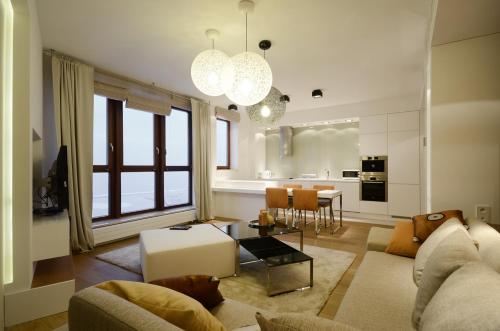 Dom & House - Apartamenty Sea Towers is located by the Bay of Gdańsk, 500 metres from the yacht marina. It offers accommodation in bright, modern apartments with free Wi-Fi and free private parking.Book now
from $57 per night 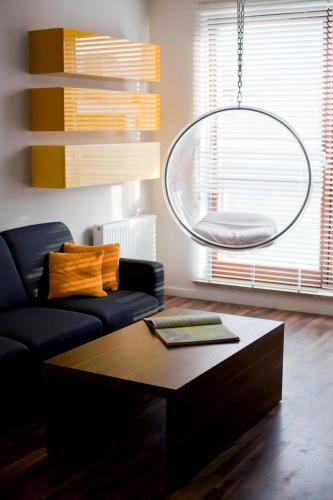 Set 2.5 km from Jelitkowo Beach, Apartament Wśród Drzew offers accommodation with a balcony, as well as a fitness centre and a tennis court. Complimentary WiFi is featured and private parking is available on site.Book now
from $68 per night 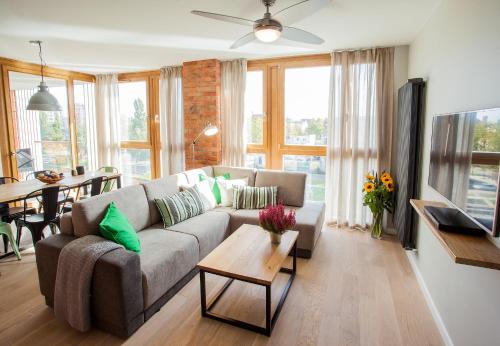 Situated in Gdańsk, this non-smoking apartment is 600 metres from Green Gate. Guests benefit from balcony. Free WiFi is provided throughout the property and free underground parking is available on site.Book now
from $29 per night 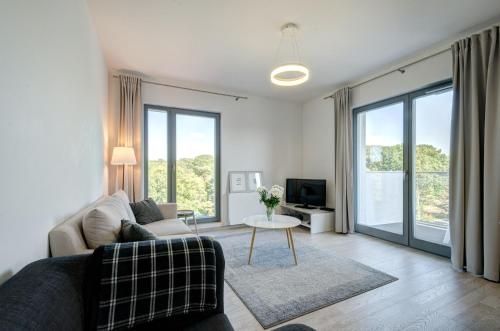 Located in Gdańsk, just 1.8 km from Brzeźno Beach, The Captain's See House provides beachfront accommodation with a restaurant, a bar, a shared lounge and free WiFi. This apartment features free private parking and room service.Book now
from $12 per night

See all 3764 accommodations in Gdansk

If you look at Gdansk as a destination, you will want to go to the Polish Gdańsk . Our private accommodations in Gdansk are waiting for you, not only in the city center, but also in the neighboring districts and smaller towns. Maybe you also like private holiday apartments in Weichselmünde and Glettkau or apartments in Sopot? But if you decide for a comfortable private accommodation in Gdansk, you will live in a modern yet historic city near the mouth of the Vistula and directly at the Baltic Sea. Your hosts will overwhelm you with information and you will quickly realize that a short trip, for example, will not be enough to explore this city and its surroundings. The easiest way to get to Gdansk is by plane, because more than 40 airlines from all over the world bring their guests to the Polish metropolis. If you have decided to stay only in the city and do not need a car, you can quickly get to your apartment in Gdansk by public transport or taxi. In the city centre you can use the tram or one of the many buses to reach the sights on your travel agenda.

An apartment in Gdansk, the Polish metropolis

And your agenda will be literally bursting at the seams with sights to see from your Gdansk apartment. Gdansk was considered the richest city in the world in the Middle Ages and this is still reflected today in the incredible historic buildings, such as the impressive Krantor and the Marienkirche. The Krantor is probably the most famous building in the city and was built in the 2nd half of the 14th century in the style of brick Gothic. If you are interested in other great buildings, you will be impressed by the Green Gate, built between 1564 and 1568 in the magnificent style of Flemish Mannerism, which forms the link between the Renaissance and the Baroque. Gdansk or Gdansk is also associated with many famous personalities such as Arthur Schopenhauer or Günter Grass.

In the university, founded in 1970, around 33,000 students take advantage of the educational opportunities offered by the faculties. Over the years, the city has developed into a modern metropolis, where not only “Couchsurfing in Gdansk” has become popular, but also trendy restaurants, pubs and discos contribute to the ambience. For this reason, your private holiday apartment in Gdansk gives you the opportunity to follow in the footsteps of history, as well as to enjoy typical local delicacies in chic restaurants and hot rhythms in the clubs. And if you would also like to have the Baltic Sea wind blow around your nose, you can simply make a detour to the Hel peninsula, which is only about half an hour’s drive east of Gdansk. Apartments in Gdynia are even better suited to reach the island of Hel or other holiday destinations in the Baltic Sea. You always wanted to discover the Baltic States? Then nothing like on a ship! Your accommodation in Riga is already waiting for you!

Latest reviews for places in Gdansk

Einlage
Sobieszewo
Stogi
Weichselmünde
Östlich Neufähr
close
Cookies help us deliver our services. By using our services, you agree to our use of cookies.