Well done. Look what authentic hosts in Canton of Fribourg are offering to you on 9flats.

Popular accommodations in Canton of Fribourg 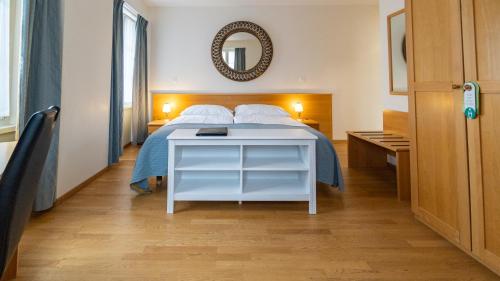 Hôtel du Cheval Blanc offers comfortable accommodation with free WiFi in the center of the town.Book now
from $97 per night

Guesthouse La Moliere is located in Murist and offers barbecue facilities and a terrace. The accommodation is 30 km from Yverdon-les-Bains, and guests benefit from private parking available on site and free WiFi.Book now
from $142 per night 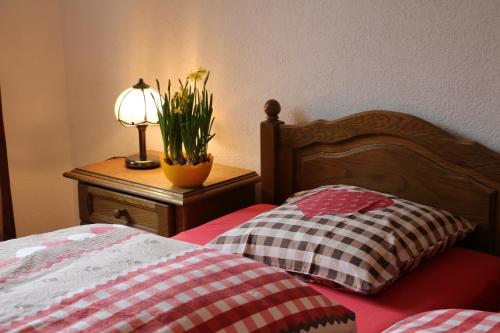 Hôtel du Vanil-Noir features free WiFi throughout the property and views of mountain in Grandvillard. Among the various facilities of this property are a garden and ski storage space. There is a restaurant serving local cuisine, and free private parking is available.Book now
from $153 per night 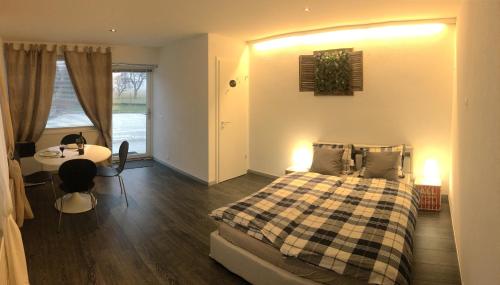 Chambre d'hôtes du Guéravet is located in Grolley and offers a garden, barbecue facilities and a terrace. The accommodation is 11 km from Murten, and guests benefit from complimentary WiFi and private parking available on site.Book now
from $11 per night 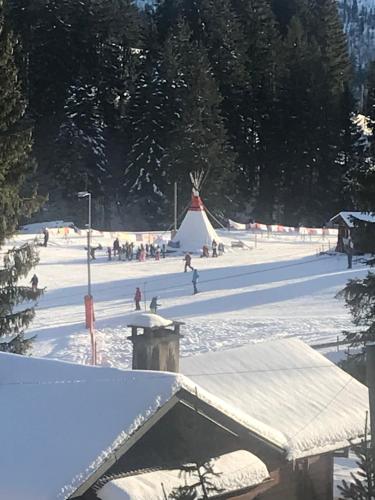 Route des Joncs 300 Appartemen is set in Les Paccots and offers a garden and a terrace. The accommodation is 48 km from Murten, and guests benefit from complimentary WiFi and private parking available on site.Book now
from $108 per night

Chalet Edelweiss is situated in Moleson and offers a bar and a terrace. The accommodation is 41 km from Murten, and guests benefit from complimentary WiFi and private parking available on site.Book now
from $11 per night 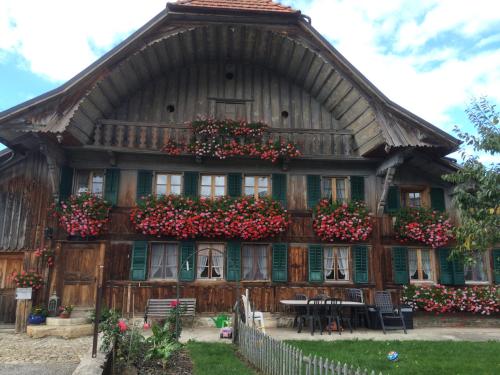 Appartement La Croix is located in Villarvolard. The accommodation is 41 km from Neuchâtel, and guests benefit from private parking available on site and free WiFi.Book now
from $11 per night 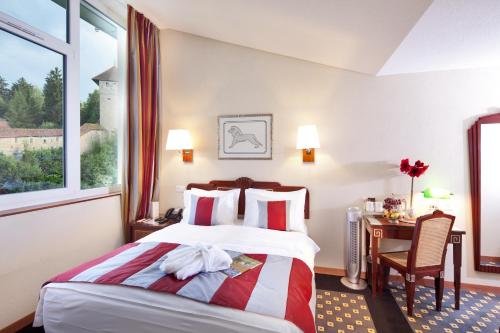 Opened in January 2013, Hôtel Fribourg Centre Remparts By Mercure is located next to the ancient city wall of Fribourg, a 10-minute walk from the historic centre of Fribourg and the Cathedral. It offers stylish rooms with Art-Deco furniture, free WiFi and free private parking.Book now
from $11 per night 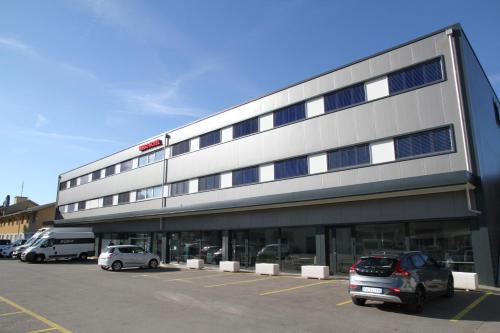 Located in Vuadens, 3 km from Bulle, Wego Hotel features a shared lounge. Each accommodation at the 3-star hotel has mountain views and free WiFi.Book now
from $98 per night 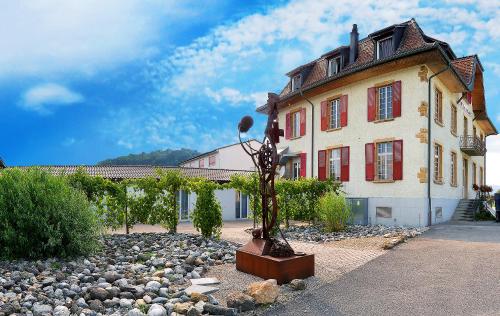 Hotel de la Gare is situated along the Broye Canal, less than 500 metres from Lake Murten. It offers bright rooms with balconies and satellite TV in a tranquil location.Book now
from $131 per night 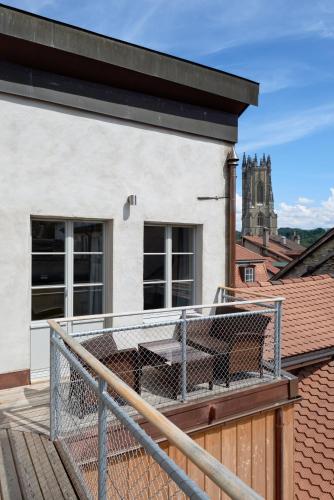 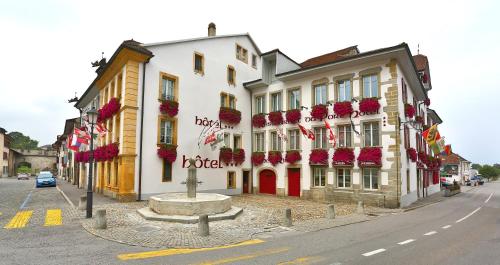 This traditional family-run hotel in the medieval centre of Estavayer-le-Lac is just 200 metres from Lake Neuchatel and the port. Guests can use a fitness room and benefit from free Wi-Fi and free on-site parking.Book now
from $118 per night

See all 187 accommodations in Canton of Fribourg

Information about Canton of Fribourg

The Swiss canton Fribourg is located in the west of Switzerland, more precisely in the so-called “French Switzerland” and consists of two larger regions, the Swiss Mittelland and the Swiss Alps. Apartments in the canton of Fribourg are very popular, because here you can enjoy the fusion of French and Swiss characteristics. Especially during the holiday and main travel periods, accommodation quickly becomes scarce, so we recommend booking in advance. Couchsurfing in the canton of Fribourg is a thing of the past with us, because we provide you with holiday homes where you can enjoy your privacy without restrictions, while you share your accommodation with guests or hosts elsewhere. Have a look at our internet portal without obligation. There you will find great examples of apartments in the canton of Fribourg. Maybe you would like to live centrally and book a private holiday apartment in Fribourg, in the canton capital. Or maybe rather an Apartment in Düdingen? Gladly you can also arrive with your whole family, after all not only the region offers you great possibilities of leisure activities and many sights, but we also deliver spacious accommodations with several bedrooms, e.g. large private Holiday apartments in Gruyères.

Reserve an apartment in the canton of Fribourg

Bulle, Villars-sur-Glâne, Marly, Düdingen, Murten and Châtel-Saint-Denis are among the largest towns and villages in Canton Fribourg. And you will certainly still find it difficult to make the choice when it comes to answering the question of which city or place to book accommodation in. Apartments in the canton of Fribourg are surrounded by magnificent nature, the towns and villages are idyllic and often of historical importance, just like the canton itself. After all, it is assumed that Celtic and Roman civilizations have already left their mark here. If you want to get to know this pre-Alpine region, you will discover a “reversed world”, because the high and rather cool summit regions lie in the south, while the north is characterised by lakes in which you can swim wonderfully in summer. But also the typical “Heidi” ambience is surrounded by a modern atmosphere. Take a look at the town of Gruyères, for example, where the historic castle complex from the Middle Ages and the futuristic Ciger Museum are close together.

The largest city you can visit from your private holiday home in Canton Fribourg is the capital of the same name between Bern and Montreux. Already in the Neolithic the settlers came to the region of today’s Fribourg, but it was not until 1157 that the city was founded by Duke Berthold IV of Zähringen an der Saane. Today Freiburg is a modern city with an interesting, historic old town centre, which is one of the largest closed city centres of the Middle Ages in Europe. The city is also enthroned on a spectacular rocky promontory, a characteristic that gives it an even more special ambience. In order not to confuse it with the German city of Freiburg im Breisgau, which is about 200 kilometres away, the name Freiburg im Üechtland is often used. You don’t know the German equivalent yet? Then book quickly an Apartment in Freiburg im Breisgau.

La Broye
La Glâne
La Gruyère
La Sarine
La Veveyse
See/Lac
Sense
close
Cookies help us deliver our services. By using our services, you agree to our use of cookies.