Well done. Look what authentic hosts in Médina are offering to you on 9flats. 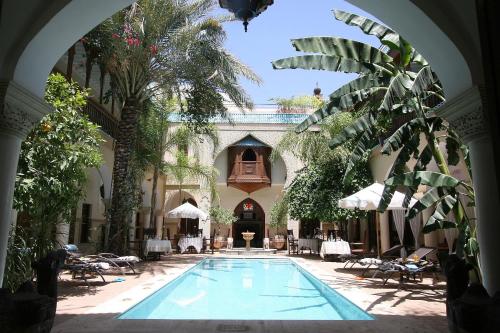 Boasting an ideal location in the heart of the Medina and easy to access by car, the brand new Riad Demeures d’Orient welcomes you in a setting combining space and light.Book now
from $192 per night 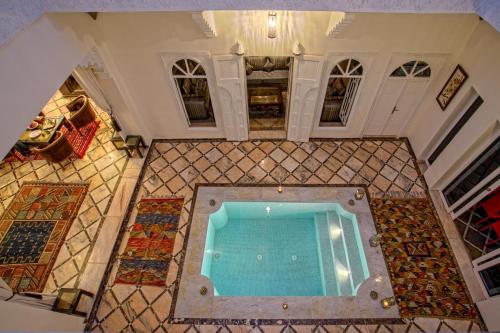 Attractively located in Marrakech, RIAD DREAMS features air-conditioned rooms, a shared lounge and a terrace. Among the facilities of this property are a restaurant, a 24-hour front desk and room service, along with free WiFi throughout the property. Private parking can be arranged at an extra charge.Book now
from $68 per night 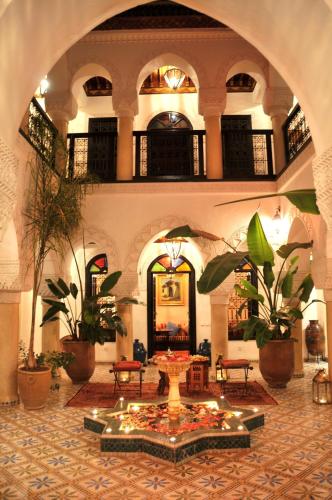 The riad enjoys an exclusive location in the Medina of Marrakesh, in the privileged district of Bab Doukkala, just minutes from the famous Jamaâ El Fna Square and of the souks.Book now
from $50 per night 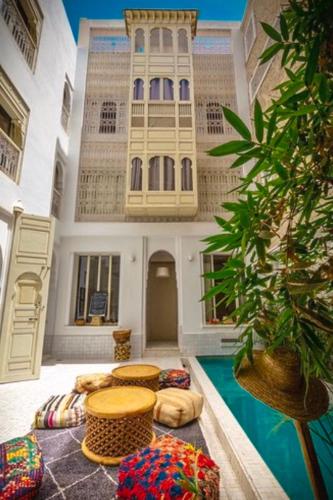 BCK Art Riad has a restaurant, outdoor swimming pool, a bar and shared lounge in Marrakech. Ideally situated in the Medina district, this riad provides a garden, as well as an indoor pool. The accommodation features a 24-hour front desk, airport transfers, room service and free WiFi.Book now
from $69 per night 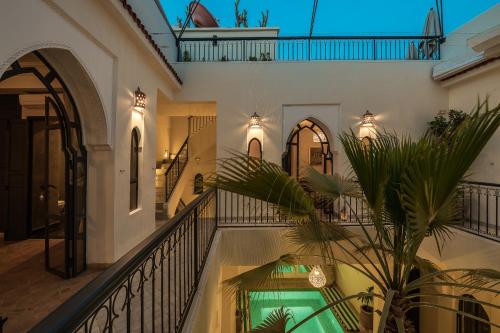 Riad Dari is an Italian-inspired riad offering air-conditioned rooms and a modern décor combined with traditional Moroccan architecture. It is set in the heart of Marrakech, a 10-minute walk from Jamaa el Fna Square and a 5-minute walk from the Royal Palace.Book now
from $75 per night 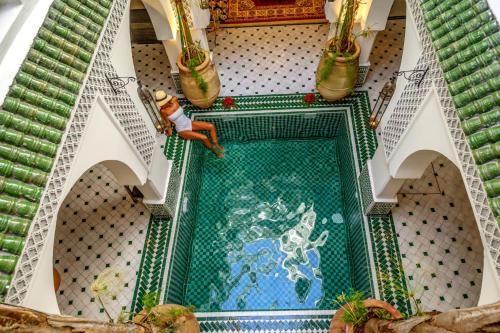 Riad Jemaa El Fna & Spa features a restaurant, outdoor swimming pool, a bar and garden in Marrakech. Featuring a terrace, the riad is close to several noted attractions, around 1.3 km from Bahia Palace, 1.6 km from Boucharouite Museum and 1.9 km from The Orientalist Museum of Marrakech. The accommodation provides a 24-hour front desk, airport transfers, room service and free WiFi throughout the property.Book now
from $50 per night 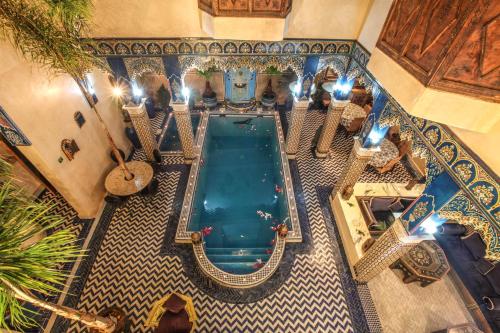 Situated a 10-minute walk from Jemaâ El Fna Square, this riad features air-conditioned rooms with free Wi-Fi, a swimming pool in the patio and a spa bath. Excursions and guided tours are proposed on site.Book now
from $37 per night 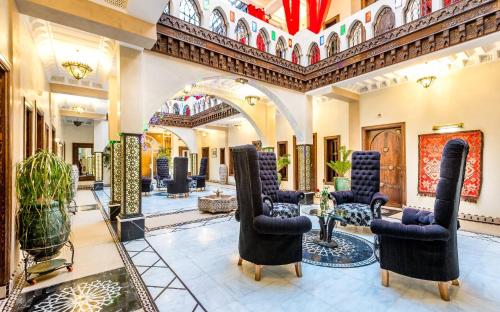 Offering a restaurant and a swimming pool, Hôtel & Ryad Art Place Marrakech is located in Marrakech. Free WiFi access is available.Book now
from $153 per night 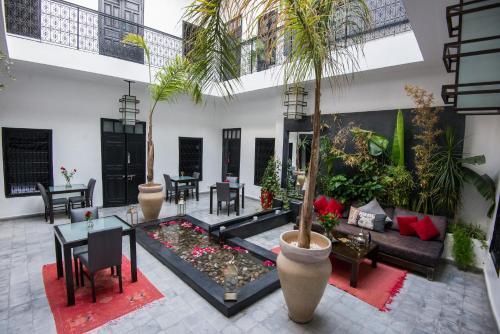 The Riad is located in the heart of the old Medina, close to the Souks and an 8-minute walk from the Jamaâ El Fna Square (please be aware that there is limited access to cars and taxis).Book now
from $80 per night 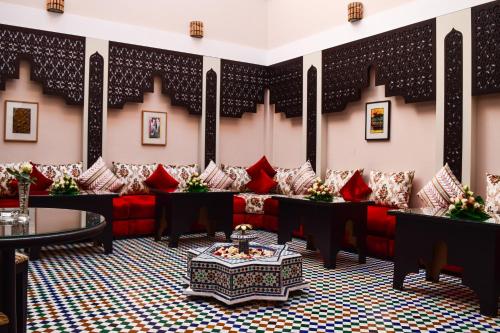 Featuring free WiFi throughout the property, Ksar LE PACHA offers accommodation in Marrakech, 500 metres from Souk of the Medina.Book now
from $69 per night 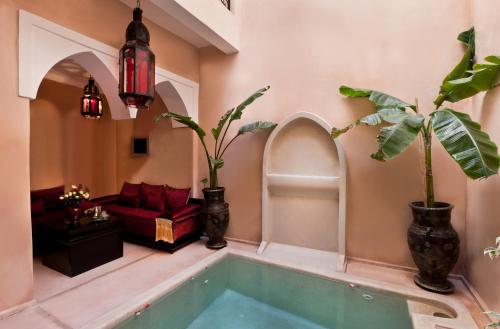 Less than 100 metres from Jemaâ El Fna Square, this guest house is just a 5-minute walk from the Koutoubia Mosque. It features a hammam, a swimming pool and rooftop terrace with views of the square and the Atlas Mountains.Book now
from $66 per night

See all 722 accommodations in Médina

The Medina Of Marrakech, The Jewel Of Morocco

In the Berber language the name of the rose and ochre city of Marrakech means ‘Land of God,’ and it is indeed a divine place. Marrakech can be divided into two distinct areas. The Medina is the old city around which the modern city has grown. This is where the true Moroccan culture and architecture can be found and which gives the true flavour of the destination. By taking vacation rentals in the Medina, in an apartment or guest house from 9flats.com you can savour the true heart of this charismatic and mystical place. Visitors can tour the city on a bus as a way of getting to know the area, but nothing beats exploring the Medina on foot. There are traditional North African markets known as souks where it seems everything is available to be purchased, but be prepared to haggle, and if in doubt, simply walk away, it’s not considered impolite, but a good bargaining tactic.

The Koutoubia is the largest of the city’s wonderful mosques. Built during the 12th century reign of the Almohad Caliph Yaqub al-Mansur, it boasts an impressive 77 metre high minaret and has a certain magic when floodlit at night. From the haven of your vacation rentals in Medina from 9flats.com, you can savour all this and more.

Vacation Rentals Medina Plunge You Into The Heart Of Morocco

No exploration from your vacation rentals in the Medina would be complete without a visit to the Djemaa El Fna. This lively and spellbinding square is full of life, noise, scents and color and is known as The Heart Of The City. This market place is an overwhelming but wildly stimulating place of vibrant activity. Here are fortune tellers, tumblers, food sellers, craftsmen, musicians and, yes, snake charmers to make you feel that this is the real Morocco. By night it is perhaps even more captivating. In the Dar Si Said Museum, an opulent palace, you can learn all about the local cultural heritage and artistic traditions of Morocco. Here can be seen marvelous examples of the carpet maker’s craft, as well as displays of fascinating artefacts such as textiles, weaponry, jewelery and wood carvings. Not to be missed is the beautiful El Bahia Palace, built as a pleasure palace for Ahmed Ibn Moussa in the 19th century. This will afford a rare insight into the lifestyle maintained by the royal courts of the period, with its cedar ceilings, stucco walls, sparkling fountains and intricately tiled floors. The spectacularly wealthy Saadian dynasty are legendary for their opulence and this can be seen in their final resting place, the Saadian Tombs, dating from the 16th century, but not reopened until 1917.

Having savored the exotic delights of the Medina, you might consider vacation rentals in Barcelona or an apartment in Madrid, or going further afield to a guest house in the Canary Islands.

Latest reviews for places in Médina