Well done. Look what authentic hosts in Goa are offering to you on 9flats. Offering an outdoor swimming pool, Chalston Beach Resort, this beachfront property is located on the beautiful Calangute Beach. Free WiFi access is available the public areas of this resort.Book now
from $64 per night 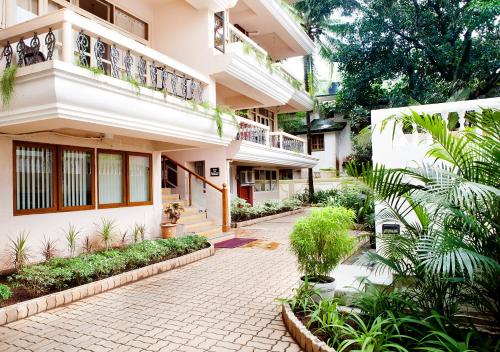 Located in Goa, Quality Inn Ocean Palms Goa is 600 metres from Calangute Beach. It offers 2 dining options, an outdoor pool and spacious rooms with a flat-screen TV. Free WiFi is available.Book now
from $45 per night

Set in Marmagao, a few steps from Calangute Beach, FabHotel Seashore Beach Resort offers accommodation with a restaurant, free private parking and a bar. With free WiFi, this 3-star hotel offers a 24-hour front desk and room service. The hotel has family rooms.Book now
from $48 per night

ITC Grand Goa Resort & Spa is set within 45 acres of landscaped gardens with glimmering waterways and lagoons along the pristine Arossim Beach. It offers an outdoor swimming pool overlooking the Arabian Sea, 6 dining options and a spa.Book now
from $155 per night 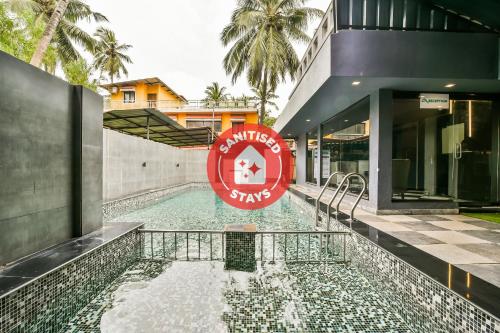 Capital O 22952 Accovah Lawande Beach Resort features a restaurant, outdoor swimming pool, a bar and shared lounge in Candolim. All rooms feature a TV with cable channels and a private bathroom. The accommodation offers a 24-hour front desk and a shared kitchen for guests.Book now
from $30 per night 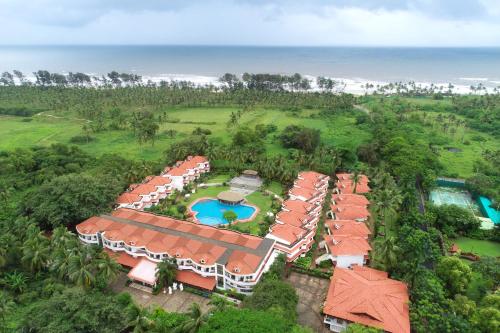 The Heritage Village Resort & Spa Goa is nestled along the pristine white sands of Arossim Beach.The property boasts a traditional Indian spa.Book now
from $73 per night 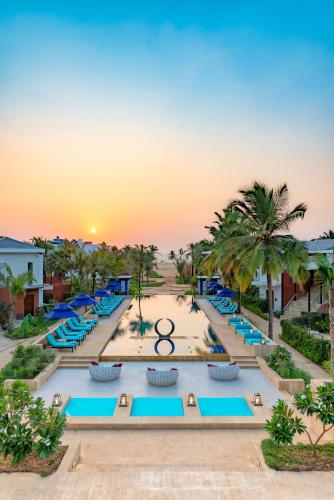 Located on Benaulim beach and overlooking the Arabian Ocean, Azaya Beach Resort Goa is set amidst 10 acres of land with unparalleled views of the Goa Shoreline. The property features a swimming pool, fitness centre and free WiFi. Goa International Airport is 26 km away.Book now
from $174 per night 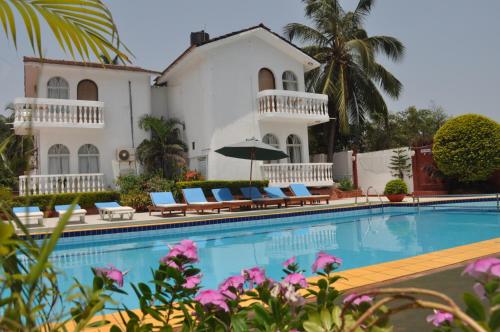 Colonia Santa Maria is a traditional Portuguese colonial villa situated on Calangute Beach. It offers an outdoor pool with a sun terrace and loungers. Modern rooms are wired with cable TV channels. Complimentary WiFi is available in the lobby.Book now
from $65 per night 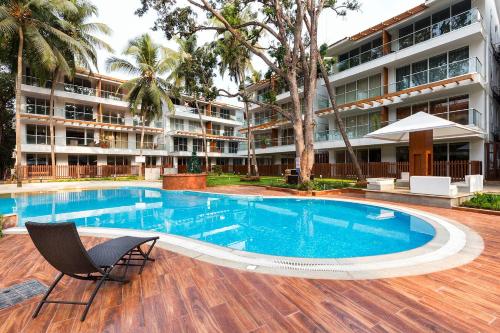 Set less than 1 km from Calangute Beach, Calangute Wave offers accommodation with an outdoor swimming pool, a garden and a 24-hour front desk for your convenience. Both WiFi and private parking are accessible at the apartment free of charge.Book now
from $54 per night 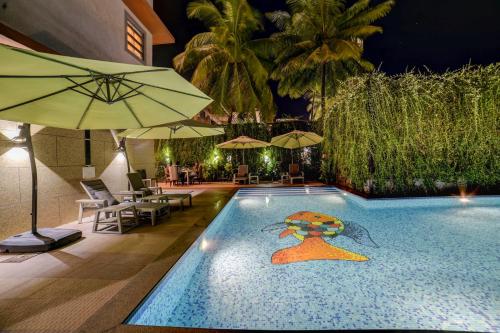 Situated in Calangute, 700 metres from Calangute Beach, FabHotel Prime Sarala Crown Calangute Beach features views of the pool. With water sports facilities, the 3-star hotel has air-conditioned rooms with free WiFi, each with a private bathroom. The hotel features an indoor pool, evening entertainment and a 24-hour front desk.Book now
from $70 per night 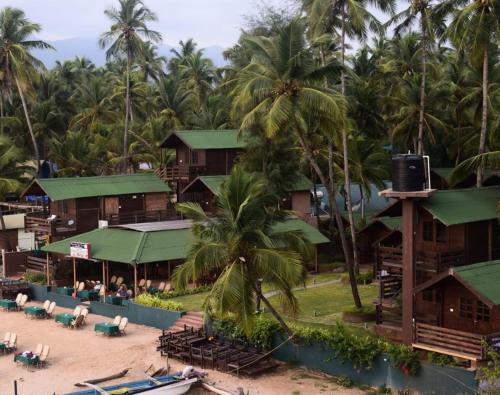 Featuring free WiFi and a restaurant, Marron Sea View Resort is a beachfront accommodation in Palolem. Guests can enjoy the on-site bar. Free private parking is available on site.Book now
from $43 per night

See all 2447 accommodations in Goa

On the west coast of India lies its smallest state: Goa. Tropical climate, white beaches, azure blue, crystal clear sea, palm trees and last but not least its impressive culture and history make this place a dream destination for many long-distance travellers. Direct flights, for example, are already relatively inexpensive from Frankfurt. Duration: A good nine hours. The optimal travel time is from October to the beginning of June, after the monsoon, with temperatures between 25 and 27 degrees Celsius. Similar to couchsurfing in Goa, you can now find a whole range of privately offered accommodation here. Outside the sterile tourist resorts you will stay in a comfortable apartment in Goa instead – without having to share a table and a bathroom with your host. In short, you get comfort and privacy in a charming room or cottage. You will find offers all over the region. And if you prefer to stay in an accommodation in Candolim near the capital Panaji, or if you prefer to live a little further north in an apartment in Aldona, is entirely up to your personal requirements and taste. From the small rustic bamboo hut near the beach to the modern apartment with its pool, everything is included.

Apartments in Goa, on the middle west coast of India

In addition to its beautiful beaches and bays, Goa has a lot more to offer. After a 450-year history as a colony of Portugal, Goa is today the most European region of India. A multitude of impressive buildings, including numerous mansions, bear witness to this imprint. In the former capital Velha Goa, churches and monasteries from this period are now UNESCO World Heritage Sites. In contrast, there are the colourful, traditional Hindu temples, which have been able to hold their own especially in the outskirts. Especially popular with visitors is the impressive construction of the Mangeshi Temple near Ponda. Before you retire to your apartment in Goa after an exciting day, you will of course have to do something for your physical well-being. And you will be amazed: Even the Goanesian cuisine is Mediterranean as well as Indian. There is a lot of rice and fresh fish. Coconut oil, chili, coriander and vinegar refine the dishes. A dessert made from eggs and coconut milk, the so-called “Bebinca”, is traditionally served at Christmas. A high-proof “Fenny”, distilled from cashew apples or coconuts, is considered the most popular alcoholic drink of Goas.

You want to explore the nature of Goas? The mountains and highlands are densely wooded with magnolia, fig and teak trees as well as bamboo, lianas and ferns. Wild orchids grow here at every corner. And along the coast there are several palm trees, including the coconut palm. Although a large part of the country is infertile, sugar cane, coconut and cashew nuts, as well as rice are successfully cultivated. Occasionally, tropical fruits such as mangos, bananas or pineapples are also harvested. But first and foremost the population lives from fishing – and from tourism. Already at the end of the 60’s hordes of hippies from Western Europe discovered the dreamlike beaches of Goa and populated them. The Goa music and the accompanying Goa parties quickly made the place internationally famous. Another very popular holiday destination in India is its capital New Delhi. As the 29 hours drive through the country could be a bit difficult, you should use one of the inexpensive domestic flights to reach your Apartment in New Delhi from Goa. Would you rather stay close to water? Then how about a detour to a neighbouring island? From the southern tip of India, not even 60 kilometres – by ship or plane – separate you from another dream holiday destination and one night in an accommodation in Dodanduwa, Sri Lanka – before you make your way home again. Make your dream come true now and book your private holiday home in Goa!

North Goa
South Goa
close
Cookies help us deliver our services. By using our services, you agree to our use of cookies.