Well done. Look what authentic hosts in Dubrovnik are offering to you on 9flats. 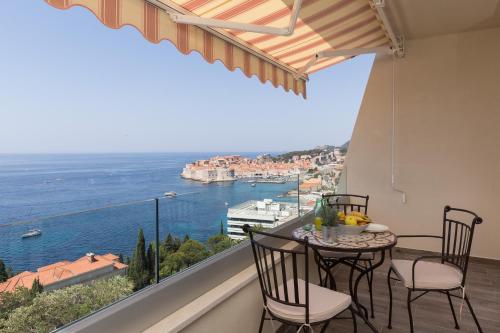 Offering views of Dubrovnik Old Town and the Adriatic Sea, Amorino Of Dubrovnik Apartments is located in the Ploce district of Dubrovnik, an 8-minute walk from the historic core of Dubrovnik. Free WiFi is provided throughout the property.Book now
from $12 per night

Featuring an elevated position with a furnished terrace, Apartments Isabora is set in Dubrovnik 270 metres from Dubrovnik old town - Ploce Gate. Free WiFi is available throughout the property.Book now
from $23 per night 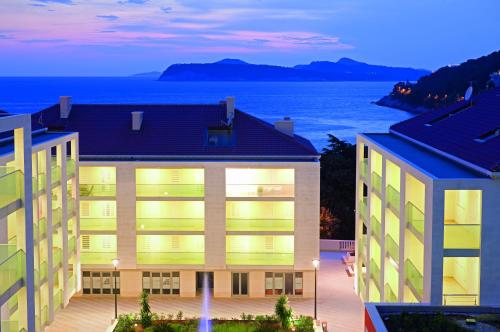 Offering a terrace in each unit, Dubrovnik Luxury Residence – L’Orangerie is located only a few steps from a pebbly beach in Dubrovnik and provides air-conditioned accommodation with free WiFi access. The UNESCO-protected Dubrovnik Old Town is 3.5 km away. Free garage parking is provided on-site.Book now
from $74 per night

Located in the very heart of the UNESCO-listed Dubrovnik's Old Town, Apartments Festa offers stylish accommodation decorated with stone wall elements. Each unit is equipped with air conditioning, and LCD satellite TV and a kitchenette. Free Wi-Fi is provided.Book now
from $60 per night 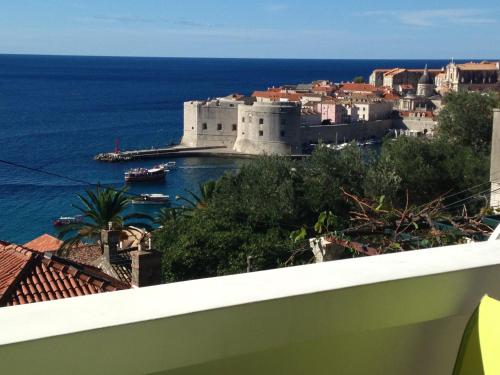 Villa Leoni is located above the popular Banje Beach and only 400 metres from the famous Dubrovnik Walls surrounding the Old City. Set in a traditional stone house, it offers modern accommodation units with free Wi-Fi and air-conditioning.Book now
from $85 per night

Dubrovnik Luxury Apartments are within the walls of Old Town of Dubrovnik, a short walk from each other. All apartments are air-conditioned and feature unique furniture.Book now
from $74 per night

Located in Dubrovnik, Apartments Villa Ari features accommodation boasting sea views. WiFi is offered throughout the property and free parking is available on site.Book now
from $90 per night 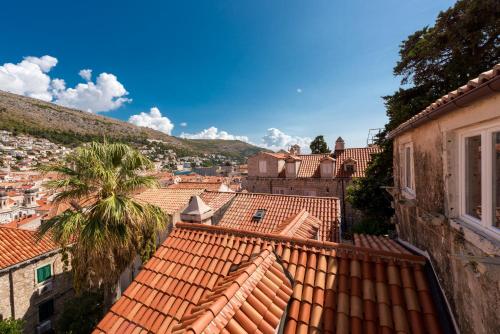 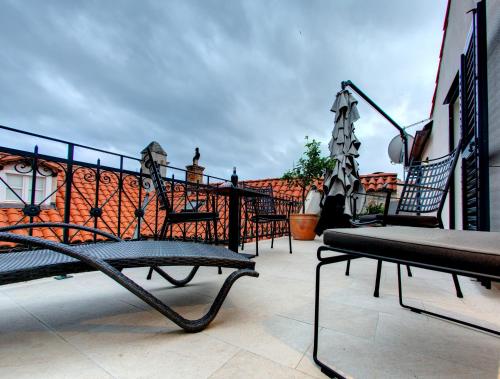 Guest House Forty-Four is attractively located in the centre of Dubrovnik, and provides a garden and free WiFi. Among the various facilities of this property are a terrace and on-site dining. A tour desk can provide information on the area.Book now
from $163 per night 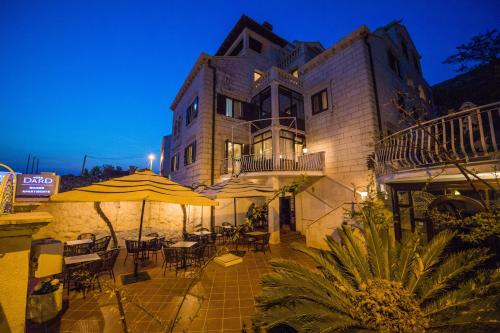 Villa Dard is situated only a 5-minute walk from Dubrovnik’s Old Town and the nearest beach. Featuring free Wi-Fi and free parking, it offers air-conditioned accommodation with a TV.Book now
from $78 per night 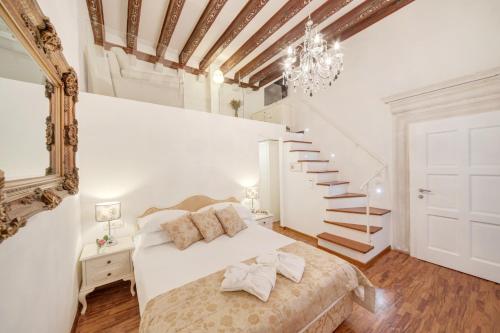 Apartments More is located in Dubrovnik, a few steps from Stradun. Walls of Dubrovnik is 100 metres from the property. Free WiFi is offered.Book now
from $89 per night 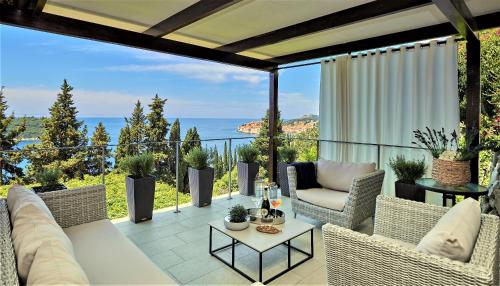 Just 500 metres from the beach, Villa King is 1 km from the UNESCO-listed Dubrovnik’s Old Town. It offers modern-style apartments overlooking the Adriatic Sea from a furnished balcony or a terrace. Free WI-Fi, a dishwasher and a flat-screen TV are standard amenities.Book now
from $12 per night

See all 1990 accommodations in Dubrovnik

Perched on the edge of the Adriatic Sea, the historic walled city of Dubrovnik is the jewel in the crown of Croatia’s tourist industry. Enjoying a pleasantly warm climate, interrupted only by occasional gusts of wind, Dubrovnik is a highly popular destination for beach holidays, in addition to drawing visitors interested in perusing its many historic delights. As it attracts thousands of visitors each year, hotel accommodation in Dubrovnik is often at a premium, particularly during high season. Luckily, 9flats provides an affordable alternative with a range of top-quality holiday apartments in Dubrovnik for rent. As these apartments are mainly situated in the residential areas of the city, you can enjoy a more personal experience of Dubrovnik and possibly make friends with the locals. Before you consider couchsurfing in Dubrovnik, take a look at the available private holiday accommodation at 9flats. For comfort and privacy, there really is no comparison.

Enclosed by a city wall which dates back to the twelfth century, the old town area of Dubrovnik is a delightful maze of narrow alleyways and cobbled streets, where time is never an issue as it always seems to be standing still. Containing a plethora of churches, palaces and historic houses, it is no wonder that this ancient area of Dubrovnik has been afforded UNESCO World Heritage Status. In addition to the history that surrounds you, the many cafes and bars located here will ensure you will never want to leave this charming Croatian town. In addition to apartments spread throughout the city of Dubrovnik, 9flats also has holiday accommodation in other nearby locations in Croatia. If you enjoy cultural experiences, such as visiting museums and art galleries, then the holiday apartments in Vela Luka could be just what you are looking for. The holiday apartments in Orebić are approximately seventy miles away from Dubrovnik and offer wonderful views of the Dalmatian coast.

Television adaptation of the cycle of novels “A Song of ice and Fire by George R.R. Martin”, this series of fantastic genre is probably the most famous of recent years. Set in an imaginary world, it narrates the struggle for the conquest of the throne among the most powerful and noble families of the Westeros (Western) and Essos (Eastern) continents.
Winner of 59 Emmy Awards, this series, which unfolds in 8 seasons (73 episodes) has seen countless beautiful locations. We present to you that of Fortress Lovrijenac in Dubrovnik, Croatia.
Fortress Lovrijenac
Imposing and massive, the Red Fortress, so named in the fantastic saga of “the Game of Thrones”, stands on a small rocky hill that rises from the sea, as if to guard the magnificent, facing city of Dubrovnik.
The Fortress provides suggestive views for fantastic photos of the crystalline sea and its islands but, above all, of Dubrovnik, from here even more magnificent, enclosed in the protective embrace of its legendary city walls.
For lovers of the aforementioned series, it is truly exciting to think that many scenes of the noble series were filmed and set here, including the episode about the mythical battle of the Black Waters.

In addition to its fascinating history and cultural legacy, Dubrovnik is also home to some of the finest beaches in the Adriatic. The long dry summers here ensure that sun-seekers are rarely disappointed. In fact, so popular has beach-life become here, the area is sometimes referred to as the Dubrovnik Riviera. Fans of water sports are also well-catered for in Dubrovnik with the water conditions ideal for sailing. Combining historic charm with sun-drenched beaches, the capital of Croatia is a perfect destination for an all-round holiday, providing fun and relaxation in equal measure.

Locations from Croatia to China

Wherever you are considering as the location for your next holiday or short break, check out the private apartments for rent at 9flats. In addition to other areas of Croatia, such as holiday apartments in Zagreb, 9flats has a presence in many of the world’s most popular cities. For example, if you want to live life to the full and surround yourself with glitz and glamour, the holiday apartments in Las Vegas are perfect.

Latest reviews for places in Dubrovnik