Well done. Look what authentic hosts in Toronto-Entertainment District are offering to you on 9flats. 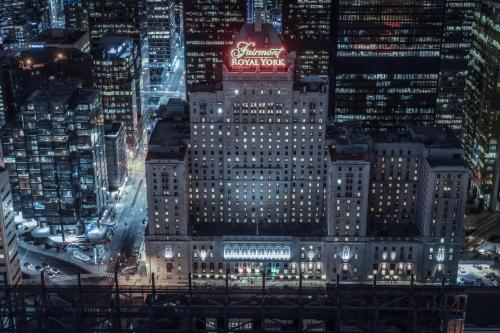 Situated in Toronto, 1.1 km from Sugar Beach, Fairmont Royal York Gold Experience features accommodation with a restaurant, private parking, a fitness centre and a bar. This 5-star hotel offers an ATM and a concierge service. The accommodation provides a 24-hour front desk, room service and currency exchange for guests.Book now
from $315 per night 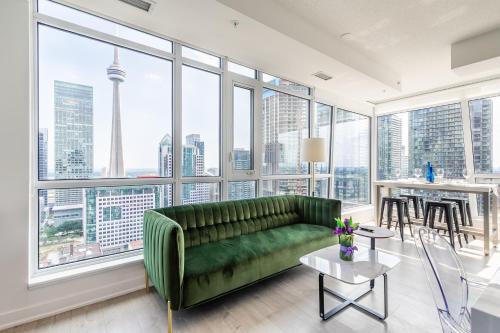 Located 1.7 km from Sugar Beach, Luxury 2 BR in the heart of Entertainment District w/ CN Tower View offers accommodation with a balcony, as well as a terrace. Complimentary WiFi is provided throughout the property and private parking is available on site.Book now
from $105 per night

Attractively situated in the Downtown Toronto district of Toronto, The Omni King Edward Hotel is situated 2.9 km from Cherry Beach, 600 metres from St. Lawrence Market and 700 metres from Hockey Hall of Fame. Boasting a 24-hour front desk, this property also provides guests with a restaurant. The hotel has family rooms.Book now
from $123 per night

Boasting a skylit indoor pool and 2 on-site dining options, this hotel is located across the street from Union Station. The eco-friendly property is adjacent from an airport express train to Toronto Pearson International Airport, 29 km away. An airport shuttle to Billy Bishop Toronto City Airport, 3 km away, is also available.Book now
from $96 per night

The Ritz-Carlton, Toronto is located centrally in the downtown core, overlooking Lake Ontario and the city skyline.Book now
from $383 per night Located in the entertainment district, this Toronto, Ontario hotel is a 5-minute walk from the CN Tower, Ripley's Aquarium of Canada and Rogers Centre. A hot breakfast buffet is included with all rooms and each is equipped with a full kitchen.Book now
from $90 per night 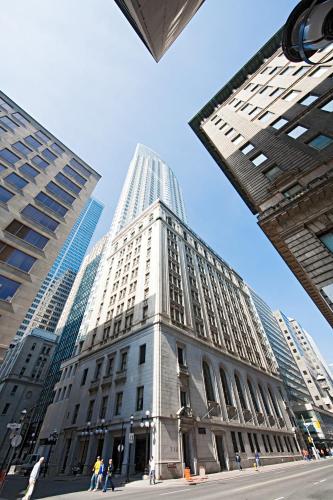 One King West Hotel and Residence

Built in 1914, this downtown Toronto hotel blends historic charm and elegance with modern conveniences. St. Lawrence Market and the Hockey Hall of Fame are less than 10 minutes' walk away.Book now
from $121 per night 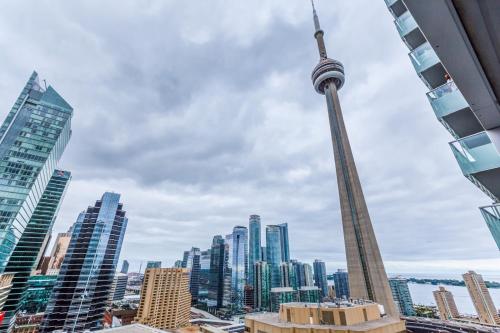 Set 1.7 km from Sugar Beach, CHOL Furnished Suites - 300 Front Street West offers accommodation with a seasonal outdoor swimming pool, a fitness centre and a 24-hour front desk for your convenience. Private parking is available on site.Book now
from $384 per night

This 5-star hotel, part of the Marriott family of hotels, combines elegance with modern amenities. It is located in the centre of the financial district and 1.3 km from the CN Tower. It features a full-service spa and spacious rooms with stunning Toronto skyline views.Book now
from $334 per night 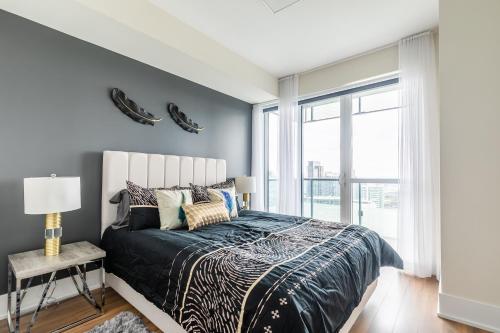 Set within 1.7 km of Sugar Beach and 400 metres of Rogers Centre in the centre of Toronto, Simply Comfort. Modern Downtown Apartment offers accommodation with seating area. Free WiFi is featured and private parking is available on site.Book now
from $82 per night

This 4-star hotel in Toronto is located in the Rogers Centre sports and entertainment complex. The hotel features Arriba, a Mediterranean restaurant, and an indoor pool. Pearson International Airport is 26 km away.Book now
from $101 per night

See all 75 accommodations in Toronto-Entertainment District

Toronto’s Entertainment District truly is the heart and soul of Canada’s largest city. Located in the King Street West area of the Downtown District, this is where Toronto’s four major-league sports teams are based. It is also the cultural heart of the city, as several theatres and arts workshops have their home in the vicinity. Whether you’re in search of high-brow theatre productions or huge pop concerts in Toronto, this is definitely the place to be. Renting a holiday apartment in Entertainment District will put you right at the heart of the action, but it will also give you the opportunity to escape from the massive crowds that are attracted to the area at all times of the day.

Dominating the area and its skyline is the Rogers Centre. Known as the SkyDome when it opened in 1989, the Rogers Centre is the home of two professional sports teams, and it has hosted American Football somewhat sporadically over the last few years. The Rogers Centre also hosts pop concerts, conventions and fun fairs from time to time. The area’s most prestigious venue, however, is the Royal Alexandra Theatre. Such was the commercial success of the theatre; the owners opened the Princess of Wales Theatre only a block away in 1993. Culture and entertainment can be found on every street, and basing yourself in a holiday apartment in Toronto from 9flats will ensure you’re right on the doorsteps of the main attractions. It will also give you the chance to enjoy a little luxury during your stay.

The Entertainment District is comprised of five main areas: the warehouse area, the theatre area, the commerce area, the events area and the Union Station area. The warehouse area features a range of old warehouses and industrial buildings that have been converted to trendy bars and nightclubs. The commerce area is home to the city’s main convention centre, while the events area is where you’ll get the chance to catch a live Major League Baseball match or a pop concert. A trip to the Union Station area is well worth a place on your itinerary as well. It is home to a beautiful train station that welcomes 250,000 passengers every day! You can absorb the special atmosphere in the Entertainment District for yourself by renting holiday accommodation in Spadina. Properties on the 9flats website are often located in real residential neighbourhoods, and that gives you the chance to see local life with your own eyes.

The service offered by 9flats gives you the opportunity to stay in local neighbourhoods around the world. Compared by many travellers to couchsurfing in Entertainment District, the 9flats service also gives you luxurious surroundings and the opportunity to have a holiday home all to yourself.

Eaton Centre
close
Cookies help us deliver our services. By using our services, you agree to our use of cookies.