Well done. Look what authentic hosts in Ascona are offering to you on 9flats. 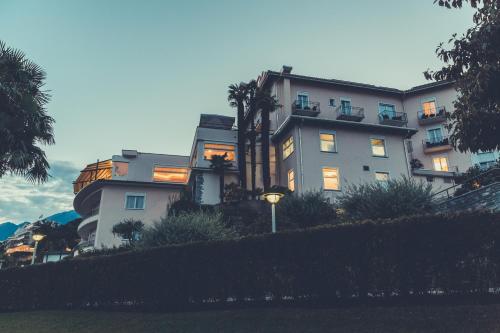 Featuring a large outdoor pool surrounded by Mediterranean plants, Hotel Tobler enjoys a quiet location on a south-east-facing slope above Ascona. It offers free shuttle services, an on-site restaurant and an indoor pool.Book now
from $11 per night 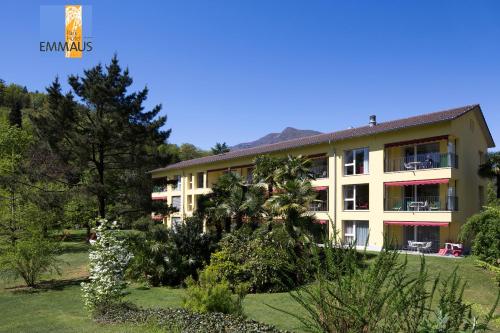 Centrally located in Losone and just 2 km away from Lake Maggiore, Parkhotel Emmaus - Casa del Sole offers spacious rooms with private balcony or terrace and free WiFi access in all public areas.Book now
from $192 per night 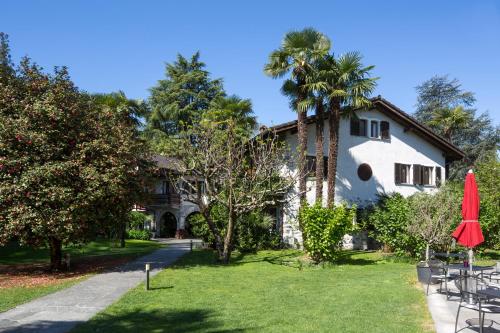 Situated in Losone, Parkhotel Emmaus - Casa Rustico** has a shared lounge, garden, and free WiFi. Boasting a shared kitchen, this property also provides guests with a children's playground. Free private parking is available on site.Book now
from $11 per night

Ascona - Lago Maggiore is situated in Ascona. It is located 2.6 km from Monte Verità and provides free WiFi plus a 24-hour front desk.Book now
from $87 per night 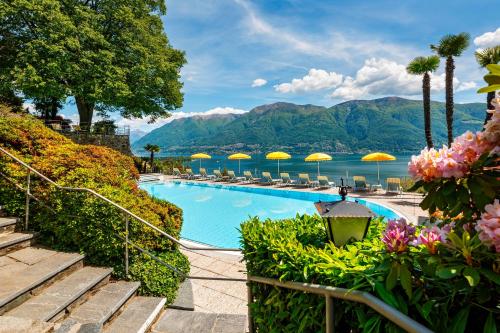 Surrounded by a Mediterranean garden in the hills above Ascona, Casa Berno features a heated outdoor pool and a sun terrace overlooking Lake Maggiore. Free WiFi is available.Book now
from $11 per night The Hotel La Perla is located on a sunny and central place on the hillside of Ascona, just 2 minutes' walk away from the centre and its famous lake promenade.Book now
from $11 per night

The “Meridiana” offers the charm of a historic Swiss-Italian Ticinese house with walls from the Middle Ages blended with modern architecture and facilities. Book now
from $11 per night 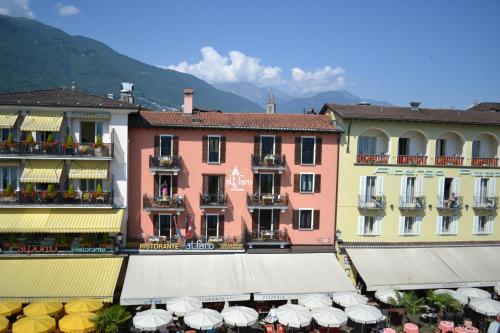 Al Faro offers a restaurant with a terrace on Ascona’s lake promenade. Breakfast is buffet style and pizza, Thai cuisine and vegetarian dishes are offered in the restaurant. Most rooms have a view of Lake Maggiore. The shipping pier is just 30 metres from the building. Free WiFi is available in all areas.Book now
from $11 per night 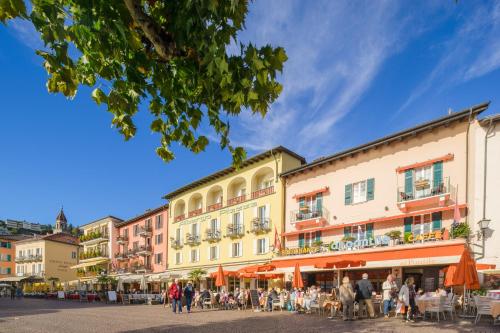 Situated right in front of the Ascona Ferry Terminal on the lake promenade, Piazza Ascona offers a restaurant with a terrace facing Lake Maggiore. All rooms enjoy a panoramic view of the lake and have free internet access.Book now
from $11 per night 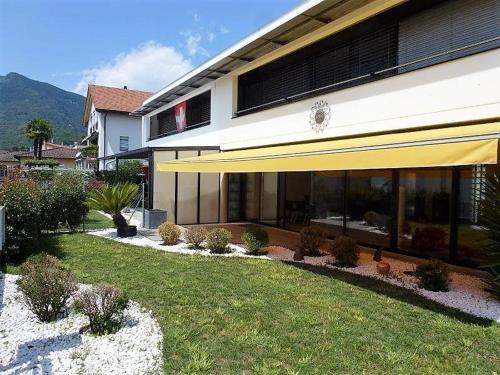 Boasting a terrace, Casa Rana features accommodation in Ascona with free WiFi and garden views. Set 2.6 km from Monte Verità, the property offers a garden and free private parking.Book now
from $11 per night 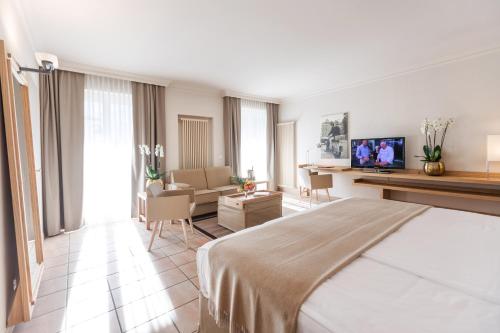 Situated in Ascona, 2.2 km from Monte Verità, Villa Favorita - Parkhotel Delta features accommodation with a restaurant, free private parking, free bikes and a seasonal outdoor swimming pool. With a bar, the property also has a shared lounge, as well as a garden. The hotel offers an indoor pool, fitness centre, evening entertainment and room service.Book now
from $11 per night 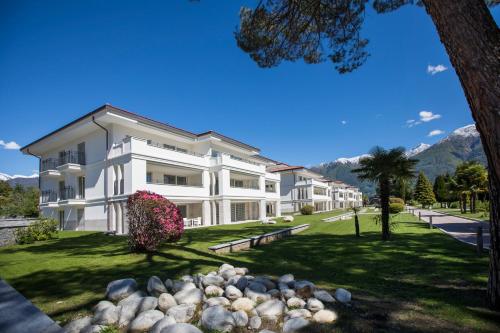 Located in Ascona, 2.2 km from Monte Verità, Delta Resort Apartments provides accommodation with a restaurant, free private parking, a fitness centre and a bar. With free WiFi, this 4-star hotel has a shared lounge and a garden. The accommodation offers a 24-hour front desk, room service and currency exchange for guests.Book now
from $351 per night

See all 236 accommodations in Ascona

Imagine waking up in the morning and opening the window. In front of you a huge, completely quiet lake spreads out. Immediately behind it rise mighty, snow-covered mountain peaks. Some fishermen catch their catch, which is served to you some hours later freshly grilled with a friendly smile. Your private apartment in Ascona offers you all this and much more.

Your apartment in Ascona is located in Ticino, Switzerland, directly on the shore of Lake Maggiore. The lake extends over an area of more than 200 square kilometres, of which only about 20% belong to Switzerland. The rest is already Italian territory. For centuries, besides agriculture and fishing, charcoal burning was the city’s most important source of income. The surrounding valleys and mountain slopes were covered by dense beech forests, which were processed into charcoal. Today, tourism is the most important pillar of the spa resort in the Swiss Alps. Together with nearby Locarno, numerous varied events are offered throughout the year, whereby Ascona in particular has acquired an excellent reputation as a jazz metropolis. Worth seeing is above all the Casa Serodine, a palazzo in the centre whose facade is decorated with rich stucco and murals. Religious motifs are the main motifs depicted. Today the building is part of the Museum of Modern Art and houses an antiquarian bookshop as well as the city’s most famous bookshop. Southwest of Ascona, also directly on the shore of Lake Maggiore, you will find numerous, very personal holiday apartments in Brissago. The small town lies directly on the border with Italy and does not have a rigid division into districts. Brissago consists instead of numerous hamlets, small settlements with often only a few houses. In contrast to couchsurfing in Brissago, here you will find a real family connection, as the entire family is often united in a single hamlet and cohesion is written in capital letters. Since the 19th century, this small town has been home to an important cigar factory. The Virginia cigars produced there are considered an insider tip among pleasure smokers.

Discover modern Switzerland from your private holiday home in Ascona

The striking contrast to small cities such as Ascona or Brissago is the largest city in Switzerland, Zurich. The metropolis on Lake Zurich forms the centre of Switzerland in almost every respect – economically, scientifically and culturally. Book your holiday home in Zurich directly with us to save your holiday budget, because in no other city in the world are the cost of living higher. But you are also offered a lot in return. Every night anew the light installations of the plan Lumière are impressing for instance. Since 2006, more and more striking points in the city have been re-staged with fascinating lighting concepts. Of course, Plan Lumière also extends to the perfectly preserved inner city of Zurich, probably the most important sight between Central Square and Bellevue Square. However, Geneva has the greatest international importance. Your holiday home in Geneva is in the immediate vicinity of the headquarters of numerous international organisations such as the UNO, CERN with its famous nuclear research centre, the WHO or the ILO. The city’s landmark is the Jet d’eau, a jet of water up to 140 metres high that rises directly from Lake Geneva. Its construction dates back to 1885 – a technical masterpiece at the time. If you have had enough of the hustle and bustle in the financial metropolises, you should relax for a few more days in a private Apartment in Bregenz. The small town in the Austrian province of Vorarlberg is located directly on Lake Constance and has the largest open-air festival stage in the world. This is also the centre of the Bregenz Festival, which has attracted numerous music lovers from all over the world every year since 1946. High above the lake stage is the castle of Hohenbregenz, the oldest parts of which were built in the 11th century.