Well done. Look what authentic hosts in Seville-Santa Cruz are offering to you on 9flats. One of Spain's most prestigious hotels, Hotel Alfonso XIII - A Luxury Collection Hotel is located next to Seville’s Real Alcazares. It offers an outdoor swimming pool, gym and a typical garden courtyard with fountain.Book now
from $240 per night 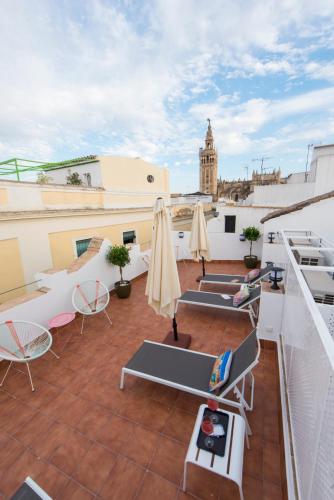 Set within 300 metres of La Giralda and Sevilla Cathedral and 400 metres of Alcazar Palace in the centre of Seville, Céntriko Apartments - Alvarez Quintero 40 offers accommodation with free WiFi and seating area.Book now
from $56 per night 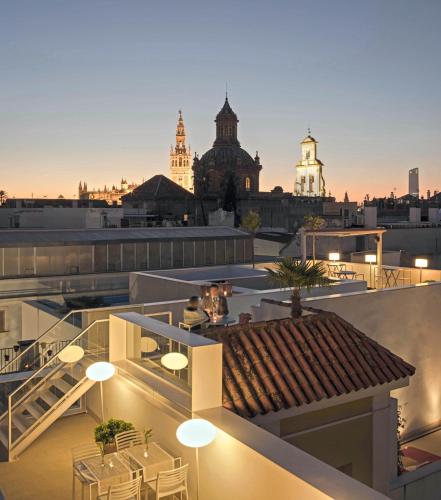 Hotel Rey Alfonso X is located in the historic centre of Seville, a short walk from the Giralda and the Santa Cruz district. An outdoor swimming pool is open from June to September.Book now
from $88 per night 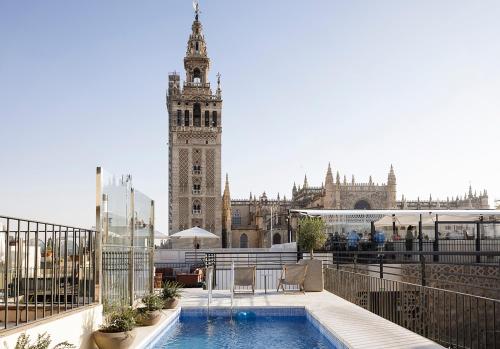 The stylish EME Catedral is located next to Seville Cathedral and 60 metres from La Giralda. It offers a rooftop swimming pool and bar with views over the city. The boutique hotel has free WiFi and a spa.Book now
from $144 per night 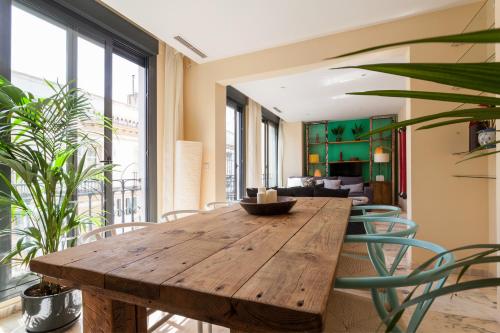 Right in the heart of Seville, situated within a short distance of Triana Bridge - Isabel II Bridge and Plaza de Armas, Soho Lounge - Space Maison Apartments offers free WiFi, air conditioning and household amenities such as a fridge and kettle. The property features city views and is 2.2 km from Plaza de España and 2.7 km from Maria Luisa Park.Book now
from $82 per night 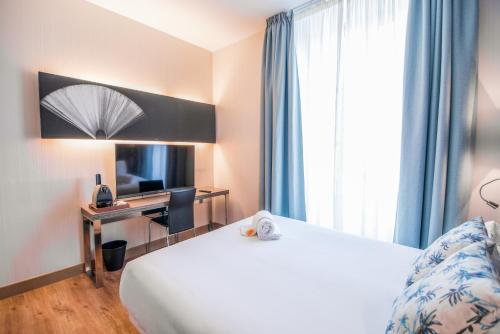 This luxurious boutique hotel offers free WiFi and free iPads in its stylish rooms, which are set in a 16th-century mansion. Set in Seville's City Centre, Petit Palace Santa Cruz is 10 minutes' walk from Seville Cathedral and its Giralda Tower.Book now
from $12 per night 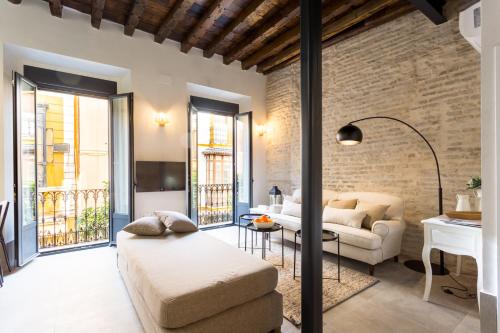 Situated within 700 metres of Triana Bridge - Isabel II Bridge and 1.2 km of Plaza de Armas in the centre of Seville, Oak & Sandstone - Modern Studio features accommodation with free WiFi and seating area.Book now
from $61 per night 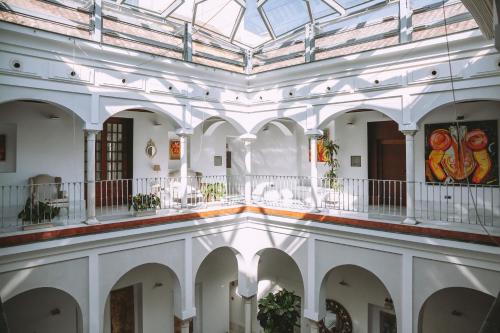 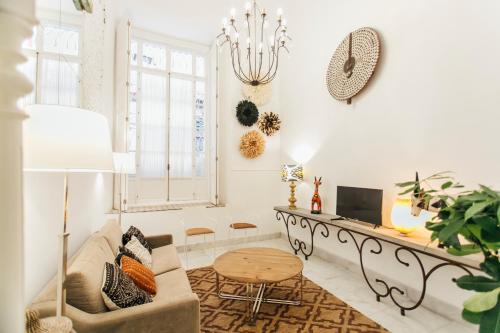 In a central area of Seville, located within a short distance of Santa María La Blanca Church and Barrio Santa Cruz, CSE Pajaritos offers free WiFi, air conditioning and household amenities such as a stovetop and coffee machine. This apartment is 3.5 km from La Giralda and Sevilla Cathedral and 3.6 km from Alcazar Palace.Book now
from $131 per night 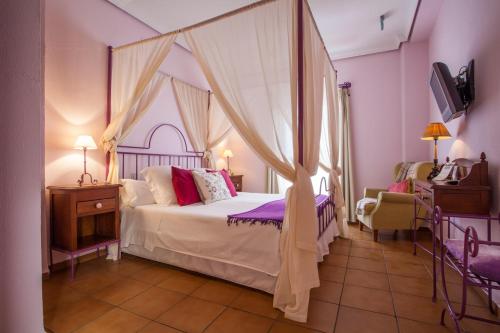 Situated at the heart of historical Seville, this charming boutique hotel is just a short walk from the main sights of the city, including the Cathedral and Alcázar Palace.Book now
from $67 per night 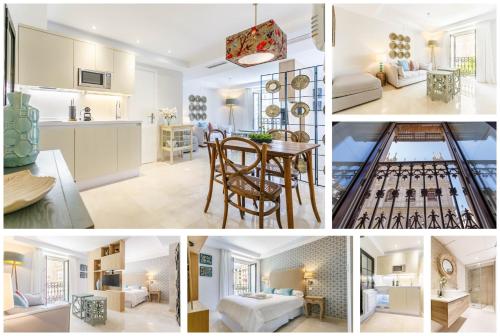 Located less than 1 km from Triana Bridge - Isabel II Bridge and a 16-minute walk from Plaza de Armas, Apartamento Living By Cathedral in Seville provides air-conditioned accommodation with views of the city and free WiFi.Book now
from $87 per night

See all 680 accommodations in Seville-Santa Cruz

Santa Cruz is undoubtedly one of the most popular areas of Sevilla for tourists. This is the prettiest and one of the most historic areas, full of winding cobbled streets, narrow alleys and hidden little plazas. It is also an area of contrasts, with the local population enjoying splendid mansions or rickety little terraced houses. With a holiday apartment in Santa Cruz from 9flats you could soon have these people as your neighbours as you enjoy living among the local community. A holiday apartment in Santa Cruz from 9flats is a great way to see Sevilla from a local perspective, pick up some tips on the city and enjoy absorbing the culture just as much as you love visiting the sights. Your holiday accommodation in Santa Cruz is in this way much like couchsurfing in Santa Cruz but offers far more comfort and privacy in your own room or apartment.

Exploring the area from your holiday apartment in Santa Cruz

Santa Cruz was once the old Jewish quarter of Sevilla and some of the churches were in fact once synagogues. It has some fabulous sights, like the covered passageway of the Juderia and its wonderful views of the cathedral. There are lots of little squares, shaded with orange trees, and narrow lanes where the houses lean across above to almost touch each other. Wandering the streets, you will find ancient palaces, churches and bars and some little curio shops among the usual tourist haunts. The painter Murillo was born here and there is a small museum at his house in Calle Santa Teresa.

Enjoying the city from your holiday accommodation in Santa Cruz

One of Sevilla’s main sights is the cathedral, built on the site of a 12th century mosque. It is a huge building with a nave 42 metres high. It is now reckoned to be the largest church in the world, bigger even than St Paul’s in London and St Peter’s in Rome. The Giralda was once a Moorish minaret to call the Muslim faithful to prayer. The Alcazar was also once a Moorish fort and is now the oldest royal palace in Europe. Try visiting the Mateas Gago area for the best selection of restaurants in the city and visit the Archivo de Indias for an incredible record of Spain’s conquest of South America.

Choosing another area in Sevilla

If you are looking for a holiday apartment in Sevilla in another central and historic area, then a holiday apartment in El Arenal would be a good choice. Adjacent to Santa Cruz, this is the old port area and holds the historic Royal Shipyards. It also features the 13th century Torre del Oro, a Moorish watchtower and is the site of La Real Maestranza, the second largest bullring in Spain. For the best accommodation in the most exciting locations, book your apartment in Sevilla with 9flats now.