Well done. Look what authentic hosts in Helsinki are offering to you on 9flats. 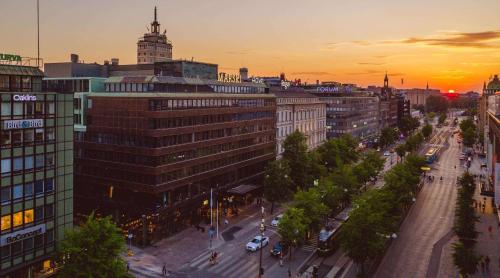 Marski By Scandic is Scandic's first signature hotel in Finland and offers accommodation just 300 metres from Helsinki Central Station, the Market Square and the Esplanadi shopping district. The hotel has a parking garage and a gym.Book now
from $95 per night 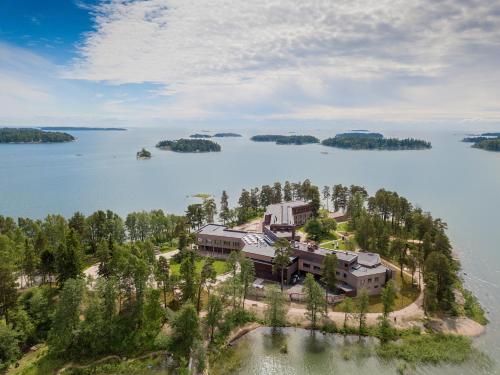 Located in Espoo by the Baltic Sea, 10 minutes’ drive from Helsinki, this hotel features rooms with flat-screen TVs and free Wi-Fi. Guests enjoy a free daily morning sauna and swim.Book now
from $116 per night 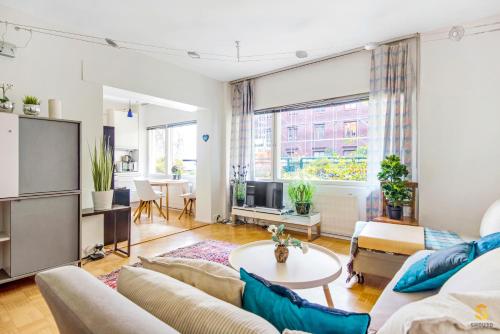 Situated in the centre of Helsinki, 2.6 km from Uunisaaren Beach and 1.1 km from Helsinki Cathedral, WeHost Kristianinkatu 3 offers free WiFi, a garden and air conditioning. With garden views, this accommodation features a patio.Book now
from $104 per night 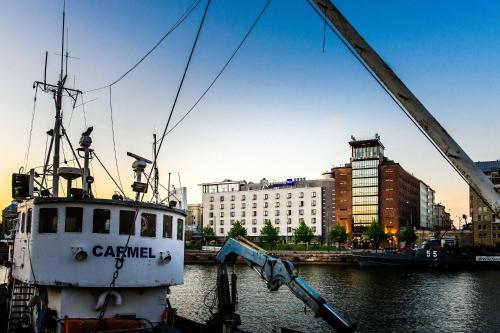 This modern, eco-friendly hotel is in the Ruoholahti business district, 1 km from Helsinki's main shopping and transport hubs. In addition to the waterfront setting by the Gulf of Finland, it offers a fitness centre, top-floor lounge and free WiFi.Book now
from $97 per night 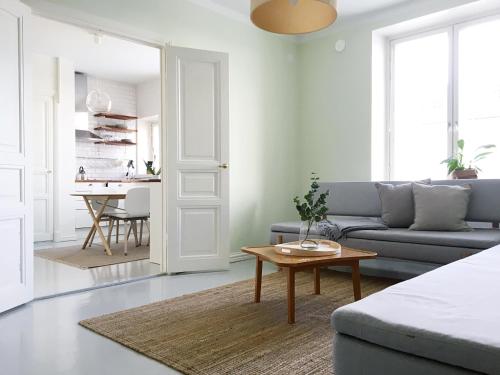 Situated in Helsinki, 2.2 km from Uunisaaren Beach, Roost Kruunuhaka features accommodation with a garden, free WiFi and a 24-hour front desk. The property has sea views and is 500 metres from Helsinki Cathedral and 2.1 km from Helsinki Music Centre.Book now
from $12 per night 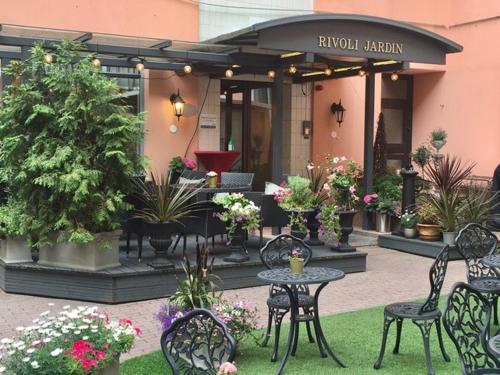 The stylish property offers accommodation next to the Esplanadi shopping streets, about 10 minutes' walk from Helsinki Central Station. It provides an on-site gym, business centre and bookable sauna. WiFi is free.Book now
from $117 per night 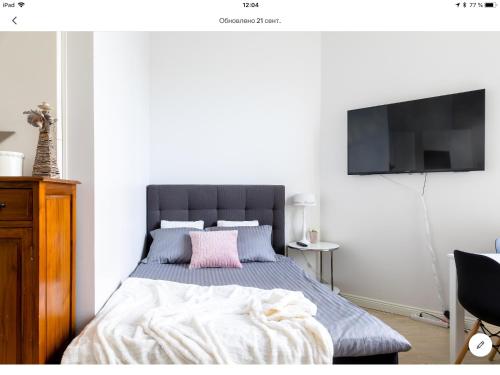 Boasting a restaurant and free WiFi, Scandinavian home City Center is set in the centre of Helsinki, close to Uunisaaren Beach, Kamppi Shopping Centre and Helsinki Music Centre. The accommodation has a sauna.Book now
from $12 per night 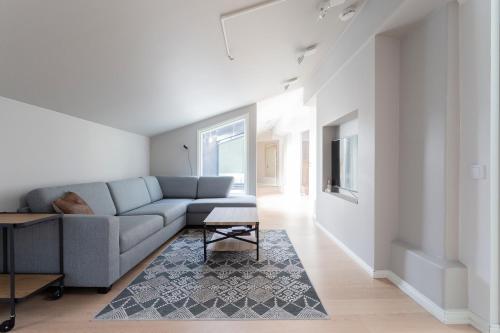 2ndhomes Luxury Helsinki City 2BR Penthouse w/Sauna is situated in the Kluuvi district of Helsinki, 1.1 km from Helsinki Cathedral, 1.5 km from Finlandia Hall and 2.1 km from Helsinki Music Centre. It is set 2 km from Uunisaaren Beach and offers free WiFi plus a 24-hour front desk.Book now
from $12 per night 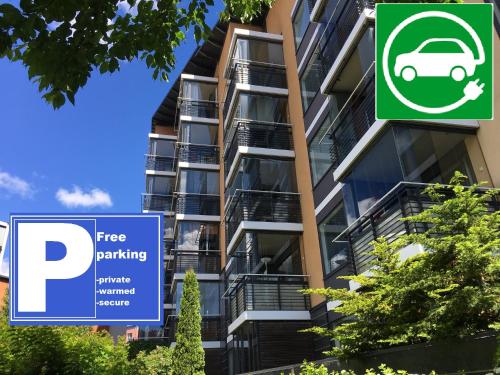 Situated 4 km from central Helsinki, this self-catering accommodation offers free WiFi, free private garage parking and a balcony with a park view. The apartment is a 15-minute drive away from Helsinki Central Station.Book now
from $195 per night 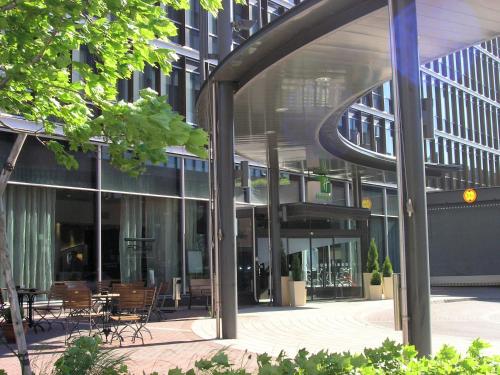 This hotel is located near the seafront in Helsinki, 1.5 km from the Bulevardi shopping street. It offers air-conditioned rooms with a flat-screen TV, tea/coffee maker and free WiFi access.Book now
from $12 per night 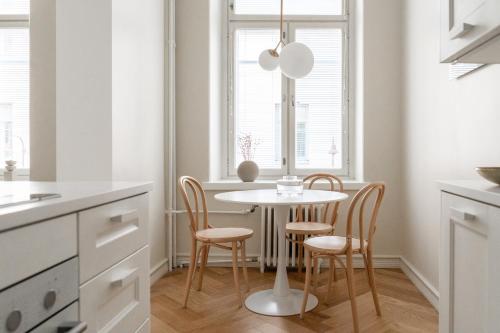 Roost Roobert 3 is situated in the Punavuori district of Helsinki, 1.1 km from Kamppi Shopping Centre, 1.3 km from Helsinki Music Centre and 1.3 km from Helsinki Cathedral. The accommodation is 1.3 km from Uunisaaren Beach, and guests benefit from private parking available on site and free WiFi.Book now
from $12 per night 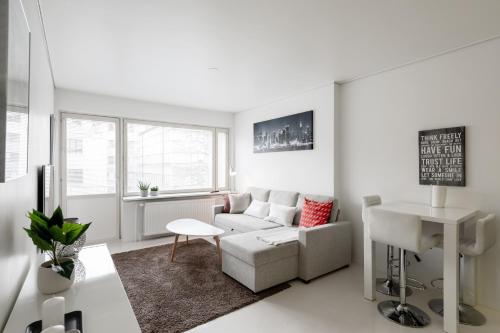 Set in Helsinki, less than 1 km from Kamppi Shopping Centre, a 19-minute walk from Helsinki Bus Station and 1.6 km from Helsinki Cathedral, Helsinki Rentals Design District offers accommodation with a balcony and free WiFi. Offering private parking, the apartment is 1.2 km from Uunisaaren Beach.Book now
from $12 per night

See all 343 accommodations in Helsinki

Helsinki is known in Finland as the “white city by the sea”, and you will recognize the reason for this nickname on your arrival. The city’s landmark, the Cathedral, towers over the Finnish capital in white with bright green domes visible from afar. Both from the water and from the air, Helsinki with its offshore islands and archipelago offers an enchanting view, and when you stay in your apartment in Helsinki you will quickly discover Helsinki’s special relationship to the sea. At the very edge of Europe, Helsinki’s harbour has always been Finland’s gateway to the world, and the city centre is also characterised by countless bays and peninsulas. Use your private holiday apartment in Helsinki for a boat trip to Suomenlinna Fortress, which sits on five islands in front of the city, and admire the Finnish capital from the sea in all its splendour. You’ll find out that the cool Baltic Sea also has fantastic beaches for swimming in summer with private accommodation in Aurinkolahti in the immediate vicinity of Helsinki’s Baltic beaches.

Apartments in Helsinki, the white city by the sea

Helsinki’s inhabitants have an ambivalent relationship with their hometown: in summer they love it, in winter they doubt it. The long Finnish summers give Helsinki a very special atmosphere when public concerts take place in all the parks, beaches and squares. During these months, the city comes to life, and with a private holiday apartment in Helsinki, you live in the middle of this fun-loving summer metropolis. Nevertheless, you don’t have to give up your privacy with a private accommodation like with couchsurfing in Helsinki. Find your accommodation in Kamppi, a popular district in the heart of the city right on the central boulevard Mannerheimintie. From here you can discover the curious sights of Helsinki, above all the underground rock church blasted into the rock and the unconventional tractor pub of the legendary Finnish rock band Leningrad Cowboys. No less worth seeing are the Finlandia Hall by the legendary Finnish architect Alvar Aalto and the Olympic Stadium, which hosted the 1952 Summer Olympics.

The capital of Heavy Metal

Although it may seem hard to believe, Finland is definitely the country with the most metal bands in the world. Just take a look at the list of events to see what we’re talking about. If you’re going to Helsinki, head to the PRKL Club, where professional and non-professional metal bands perform non-stop. Or don’t miss the Tuska Open Air festival (June), a 3-day metal festival. It must also be said that Finland is home to some of the world’s best musicians of this music as well as an underground movement that far surpasses that of all other countries in the world.
In Helsinki, you can find bars, nightclubs, festivals, record shops and more, all with a heavy metal theme.
Go to The Riff (Iso Roobertinkatu 3, 00120 Helsinki), where you can enjoy top quality drinks while listening to the best heavy music of the moment. Great for pre and afterparty. If you like live music, don’t miss the Nosturi (Telakkakatu 8, 00150 Helsinki): located near the city centre, it hosts more than 120 events a year, mainly heavy metal but also other genres.
If you’re in the mood to listen to the classic heavy metal repertoire, don’t miss the Base Bar and the Praha. In the evening, Helsinki offers an endless number of places to listen to live gigs of metal, among which we definitely recommend Tavastia, Semifinal, The Circus, Elmun Baari, Bar Loose, Kuudes Linja, Korjaamo, Ääniwalli and Lepakkomies.
In summertime, after the bars close you can usually find a party at the Sompasaari sauna continuing into the early hours of the morning.

A visit to an apartment in Helsinki is not only an unforgettable experience in summer. The snowy Finnish winters give the Baltic metropolis a very special charm, when Helsinki becomes a paradise for skiers and the widely visible cathedral with the snow-covered Senate Square beats the competition. Also find your private apartment in Lempäälä around 150 kilometres north of Helsinki on Lake Sääksjärvi. From here you can reach the old industrial city of Tampere by bus in half an hour. Tampere is known as the Finnish city of Manchester because of its characteristic factories and owes its nickname “Manse” to this name. With its old chimneys and restored factory buildings, the university town exudes its own charm. Tampere also offers a wide range of cultural attractions that are in no way inferior to those of the Finnish capital. If you travel from Helsinki or Lempäälä to your accommodation in Saint Petersburg, you will also cross the spectacular forests and lakes of Karelia. This historical landscape is now shared by Finland and Russia and plays a very special role in Finland’s mythology and culture.

Latest reviews for places in Helsinki